The case for higher taxes

The case for higher taxes 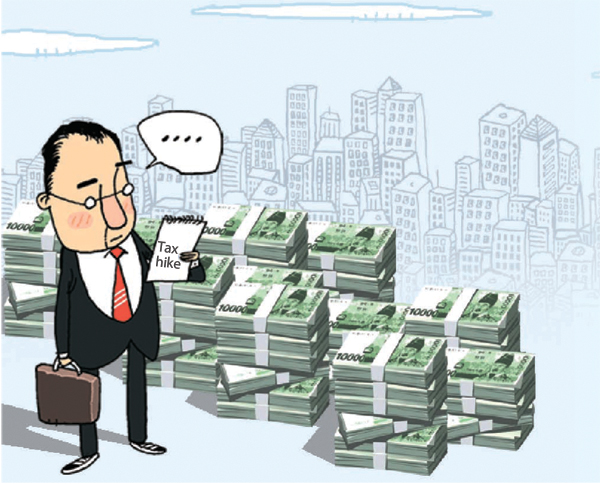 Korean society has gone past resentment and become hateful when it comes to the widening income and wealth gap, according to a white paper that the Presidential Committee for National Cohesion will soon publish. The report obtained by the press said anger stemming from the discrepancies in wealth was taking extreme forms. It warned that if the issue is left unattended, society could crumble.

How did we get here? At this rate, our country is headed off a cliff. The presidential committee is not exaggerating. Public polls showed similar results. People complain of relative poverty and serious income inequality. They grumble that no matter how hard they try, they cannot move up the social ladder because of few opportunities. Worse, they lack even hope, as both poverty and riches are handed down from one generation to another. Actions must be taken before it is too late.

The solutions are already well known. We need more jobs, and the way to get them is already laid out. The service sector must be upgraded, and small and medium-sized enterprises need strengthening. Structural reforms in the labor sector and corporate restructuring must be accelerated. Labor-related bills need to be passed immediately.

At the same time, welfare infrastructure must be strengthened. The economy is sluggish and job scarcity could become permanent. We have seen in Japan how hard it is to shake off a structural slowdown. Even with low birthrates and a decreasing population, young Japanese cannot find permanent jobs.

There would be fewer worries if our economy was humming along at 6 percent to 7 percent. That would be enough to create jobs regardless of any issues in the job market. But our economy cannot grow beyond 3 percent. It has lost steam and vitality, and it will likely weaken further.

From 2031, the economy’s growth potential will sink to the 1 percent level, according to estimates from not only the Organization for Economic Cooperation and Development (OECD) but also state think tanks. After that, the economy would generate zero growth just like Japan, whose growth potential is at just 0.5 percent. Issues with jobs would only worsen.

Since we know the worst has yet to come, we must strengthen the social safety net. We don’t need a report by a presidential committee to know our current social welfare system is hardly satisfactory. Korea’s public social welfare spending compared to its gross domestic product is way below the OECD average.

The problem is funding. We will run into serious trouble from 2034 if we sustain current welfare spending. From that point on, the government will be forced to seek new debts to pay off existing ones. The national debt-to-GDP-ratio, which was at 37 percent in 2014, will hit 169 percent by 2060. It would not be sensible to increase welfare spending when we cannot afford our current level.
Tax hikes are the only solution to increasing welfare. The government must persuade the people that in order to enjoy better social welfare in their old age, they must contribute more now. Korea’s taxes are far below the OECD average. Social conflicts slow the economy. Welfare can solve some of these conflicts, stimulating growth as a result.

I suggest we seriously discuss higher taxes leading up to next month’s election. Welfare promises will likely dominate the general election. Funding will naturally come up. The election could be a tipping point in the tax hike debate.

Some will decry talk of higher taxes when people are already struggling with job insecurity, stagnant income and high debt. But this is exactly why we need better social security. In slow growth, inequalities and resentment could deepen. Some would say it is too premature to talk about a tax hike. But the debate should start now so that the next government can implement it as soon as it takes office.

Raising taxes is very challenging. The country could be swept up in a serious divide, and the government could lose power. It is not easy to determine how much to levy on whom. The majority opposes tax hikes even though they agree on the need for better welfare.

There is much to be discussed. Even with good reason, how the problem is approached and addressed is critical. In fact, it could be too late to initiate discussions now. Tax hikes should be addressed together with welfare issues to prevent inefficient and reckless spending.


*The author, a former editorial writer for the JoongAng Ilbo, is an adviser at the Korea Institute of Finance.