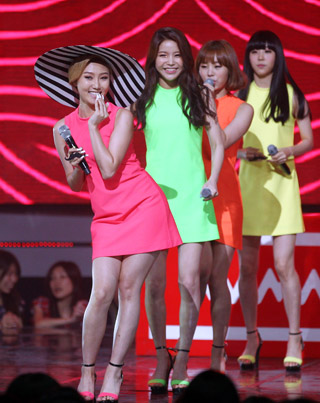 K-pop girl group Mamamoo’s first regular album, “Melting,” has placed eighth on Billboard’s World Albums chart. The group is the only K-pop group currently ranked on the chart.
The World Albums chart ranks sales of non-U.S. music albums.
K-Town, a column dedicated to K-pop, highlighted the uniqueness of the album, saying, “Mamamoo’s ‘Melting’ brings retro soul back to K-pop.”
K-Town went through individual songs on the album and said they “go against the grain of typical K-pop albums.”
The column also had high praise for Mamamoo’s musical prowess, shining a light on their past work.
The girl group represented Korea at the renowned South by Southwest music festival, held on Wednesday in Austin, Texas.
The four-member group showed its dominance in the Korean market by taking first place in major music programs, including “Music Bank” and “Inkigayo,” last week.