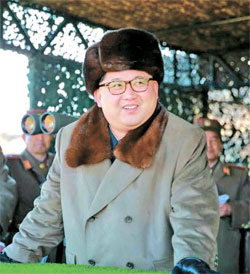 North Korea’s Punggye-ri site in Kilju County, North Hamgyong Province, is active and could be ready for new nuclear tests, according to 38 North, as Pyongyang continues to ignore United Nations resolutions and threaten further nuclear and ballistic missile tests.

The website 38 North, which specializes in North Korean affairs and is run by the U.S.-Korea Institute at Johns Hopkins University’s School of Advanced International Studies (SAIS), said Friday that satellite imagery from March 6 and March 14 show active maintenance at the Punggye-ri nuclear test site.

The activity “does not appear directed at further tunnel excavation,” it said, but rather to maintain existing tunnels as well as to clean up after the nuclear test in January.

“It is highly likely that site is capable of supporting additional tests at any time,” the website continued.

According to 38 North, water appears to be draining from the entrance along a drainage ditch. “This may support the hypothesis that branching tunnels lead to other test chambers since the shaft used for the January test should have been completely sealed to prevent radioactivity leakage,” it observed, adding this was the case for the third nuclear test in February 2013.

If there are unused shafts in this portal, they are expected to be drained for maintenance and to keep them ready for future detonations.

Other satellite imagery shows snow being cleared from the south portal tunnel entrance, “indicating that they are being at least maintained for future tests.”

On March 10, Pyongyang fired short-range ballistic missiles as a response to the UNSC resolution.

Hours after the firing of the missiles, the United States called for an emergency meeting of the 15-member council at the UN headquarters in New York, which released a unanimous statement Friday calling the latest launches “unacceptable.”

The statement went on to express “grave concern” over the ballistic missile launches, which it said “constituted a clear violation of UN Security Council resolutions.”

Kim Hong-kyun, South Korea’s special representative for Korean Peninsula peace and security affairs, told reporters Saturday, “We have proposed three-way negotiations between South Korea, the United States and China in order to carry out the UN Security Council resolution, and China said it is reviewing this with an open posture.”

Hong held talks with his Chinese counterpart Wu Dawei in Beijing on Friday.

On March 8, Chinese Foreign Minister Wang Yi also said Beijing is open to talks among three, four or five nations if they help bring back the Korean Peninsula denuclearization issue to a dialogue format. This was a departure from China’s previous staunch stance that there could be no dialogue without North Korea.

Six-party talks among China, Japan, Russia, the United States and the two Koreas have been stalled since late 2008.