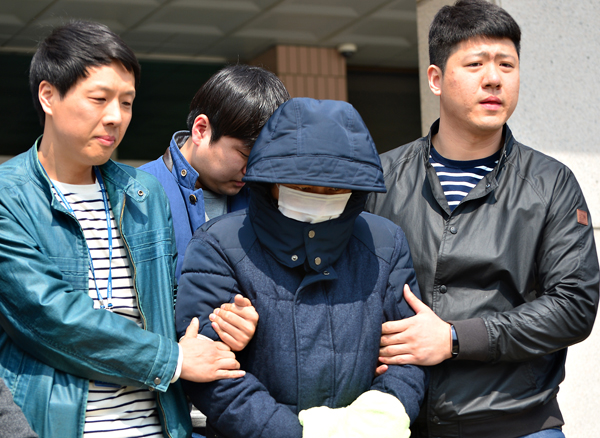 A man suspected of secretly burying his dead daughter on a mountain five years ago is transported Sunday to the Cheongju District Court in North Chungcheong to attend a hearing for a detention warrant filed by police. [NEWSIS]

Police arrested Sunday a middle-aged man in Cheongju, North Chungcheong who admitted to secretly burying his four-year-old stepdaughter’s body on a mountain five years ago.

A day before, the girl’s 36-year-old mother asphyxiated herself after being questioned about the girl’s disappearance by police. She left a suicide note admitting to killing the girl but not saying how.

The case was the latest discovery of a child murder by an ongoing government campaign to find missing kids, which was sparked by the escape in December of an 11-year-old girl who had been imprisoned in her own house for two years and almost starved.

In Cheongju, the girl’s biological mother, who has only been identified by the surname Han, was unmarried when she gave birth to the girl. In May 2011 she married the man in the case, who is surnamed Ahn and is now 38 years old.

Eight months after the wedding, the girl died at the age of four.

According to Cheongju police, Ahn puts all the blame on his late wife. At a press briefing on Sunday, they say he claims his wife was angry at the daughter’s slow progress in toilet-training.

Allegedly, the mother shoved the girl’s head in a tub filled with water “several times” because she wouldn’t obey her orders.

Ahn told police he left for work at 8 a.m. on the day of the altercation in mid-December 2011 and returned around 9 p.m. to find the child already dead. The couple left the body on their veranda for two days before taking it 27 kilometers (17 miles) to Jincheon County, North Chungcheong, to bury it on a mountain.

Police took Ahn to the mountain but have yet to find the dead body.

Han wrote in her suicide note that she was “solely responsible” for the girl’s death and that she felt “sorry” for her family. Police concluded she died by asphyxiation from toxic charcoal fumes.

Asked why they didn’t report the girl’s death five years ago, Ahn told police that Han, who was pregnant at that time with their first baby, “begged” him not to.

The baby, now five years old, was recently taken into custody by a child protection agency. Police did not say whether she was abused in any way.

The death was discovered by the local community center which called to inquire why the couple hadn’t enrolled their daughter to school as part of the campaign to track down missing kids.

The center wasn’t aware the child was dead.

The couple told the community center the daughter was at her grandmother’s house, and then said she was sent to an orphanage in Pyeongtaek, Gyeonggi.