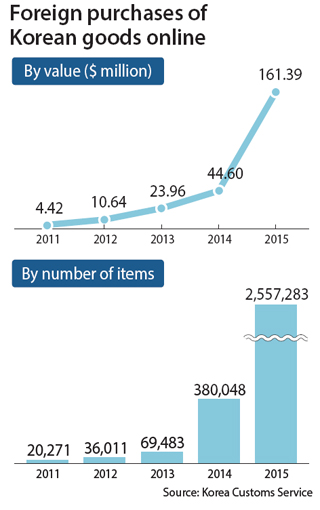 Korea’s exports of products overseas are stuck in a declining spiral. But purchases of Korean goods online by shoppers abroad continue to mushroom, fueled by the popularity of Hallyu, or the Korean Wave of cultural content such as K-pop and hit TV dramas like “Descendents of the Sun.”

Online purchases by foreigners more than tripled last year, according to the Korea Customs Service on Tuesday. In terms of value, foreign purchases of Korean goods rose 261.9 percent year on year to $161.4 million last year. In terms of volume or the number of items purchased, sales surged 578.1 percent to 2.59 million items.

One of the reasons the increase in value wasn’t as sharp as the number of items sold was because of the Korean won’s weakness.

This is a complete contrast to overall exports, which have declined 14 consecutive months through February and are likely to fall this month as well. Already in the first 20 days of this month, exports shrank 19.2 percent year on year to $2.38 billion.

By country, China accounted for the most online purchases, and they grew 45.8 percent last year to $73.9 million. Singapore came in second with $26.9 million and the U.S. third with $22.4 million. However, by the number of items purchased, Singapore outnumbered Chinese consumers as they bought nearly one million items compared to China’s 756,000.

Shirts were the most popular items purchased by foreigners online with sales of $26.9 million, accounting for 26.7 percent of all sales. Cosmetics took second place with more than $19.4 million in sales last year, accounting for 19.3 percent.

However, the popularity of Korean products abroad has produced a new challenge: counterfeits. According to China’s State Administration for Industry and Commerce, 40 percent of cosmetics sold online in China are fakes.