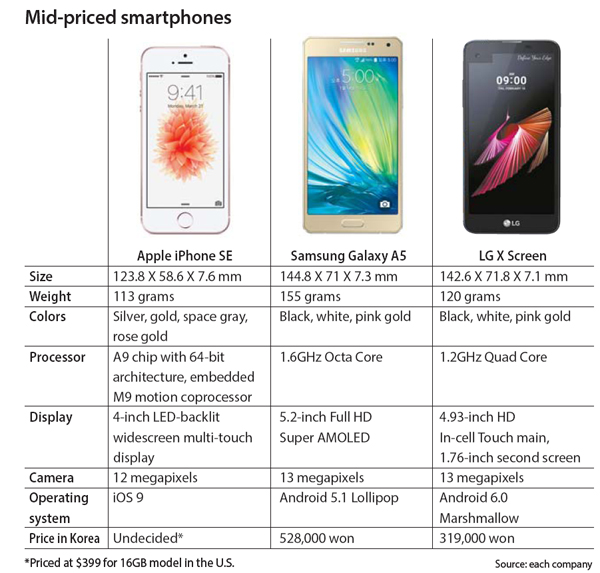 Apple unveiled a smaller and cheaper version of the iPhone on Monday in California, which places the latest iPhone SE in direct competition with budget-friendly phones sold by tech rivals including Samsung Electronics, Xiaomi and LG Electronics.

It was the first iPhone to retail for below $400, as Apple seeks to attract a wider mid-range consumer base in high growth markets including India and China.

Starting at $399, the iPhone SE has a 4-inch-screen, comes in four stainless-steel finishes and sports the faster A9 processor, which also runs the larger iPhone 6S handset.

The new phone delivers most of the features found on the iPhone 6S, including improved cameras, faster power processers and Apple Pay.

The model is fitted with a 12-megapixel camera and the Touch ID fingerprint scanner.

The smaller body will appeal to one segment of the market who felt phones were getting too big.

But the new phone failed to generate favorable buzz. CNET, a website specializing in tech reviews, reported that the iPhone SE “generated a collective yawn” online.

Apple’s foray into the mid-range market comes as the company faces declining sales growth in the saturated smartphone market. The company projected its first quarterly sales decline since 2003 in January, underscoring concern that demand for premium smartphones has peaked.

Tablet shipments are forecast to decline 5.9 percent to 195 million units in 2016, according to market researcher IDC.

Rivals like Samsung Electronics have already expanded their lineups of mid-range budget smartphones.

Samsung recently added different labels to its budget lineups such as A and J. Those low-priced phones are no longer cheap alternatives with minimal functions. They come with decent functions and cameras comparable to flagship models but with competitive prices. For instance, the 2016 edition of Samsung’s A5 has a 13-megapixel primary camera on the rear and a 5-megapixel front shooter for selfies.

Smartphone makers like Lenovo, Xiaomi and Motorola and tech giants Google and Microsoft have all launched affordable smartphones with advanced cameras and high-resolution displays.