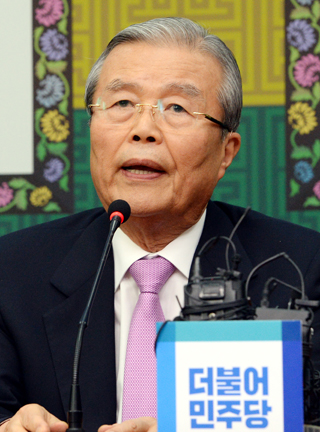 In his office in the National Assembly on Wednesday, Kim Chong-in, interim leader of the main opposition Minjoo Party of Korea, announces that he will not bow out and will overhaul the party’s identity. [NEWSIS]

The interim leader of the main opposition Minjoo Party of Korea confirmed that he would continue in his job after a nasty political rupture - and keep trying to overhaul the party’s identity, what it stands for and who controls it.

Interim leader Kim Chong-in, who is also running the party’s campaign for the April 13 general election, was also confirmed as the party’s second proportional representative candidate, virtually guaranteeing him a fifth term in the legislature. A nasty political fight nearly split the Minjoo Party earlier in the week after he gave himself that rank.

But the tug-of-war for control of the party between Kim, with his reformist ideas, and the hard-line former student activists who have controlled the party for years could restart at any time.

“If we don’t solve the identity problems among some factions, we have a long way to go before becoming a party that can win a presidential election,” Kim said at a press conference. “The central committee demonstrated what I cannot easily accept. I saw the Minjoo Party still unable to move on from its old ways.”

Kim said he decided to remain in the party to change an identity the party clings to. And he said he worried about the effects of him leaving just 20 days ahead of the election.

When asked whether he would be named the No. 2 proportional representative candidate, he confirmed that he would, and said that was necessary for him to lead the party.

“The essence of this conflict is the hard-line liberals’ resistance to interim leader Kim,” said a source at the Minjoo Party who asked not to be named. “It is just a prelude to turmoil that will occur after the general election.”

Kim, 75, joined the Minjoo Party in January at the invitation of Moon Jae-in, the party’s chairman. Moon recruited the architect of President Park Geun-hye’s economic pledges in the 2012 campaign in order to reinvent the struggling opposition party ahead of the April general election.

Later that month, Moon relinquished all authority, including power over nominations, to Kim.

Since then, Kim vowed to reinvent the party and shed its leftist-activist image. That was taken as a direct attack by the former activists, who were also loyalists to the late President Roh Moo-hyun. Kim repeatedly said the party had to be seen as a group of practical lawmakers and experts to have any success in the future.

He followed through on those promises in nominating proportional representation candidates for the election, eliminating left-leaning former student activists and choosing moderate figures who have expertise in a wide range of social issues from law to K-pop tourism.

But Kim’s proposed proportional nomination list - with his name near the top - plunged the party into turmoil as the central committee, largely composed of former student activists, hard-line liberals and the pro-Roh faction, rejected Kim’s list and created a new one early Tuesday. Kim said the party insulted him as a “greedy old man.”

On Tuesday afternoon, former leader Moon, who served as Roh’s presidential chief of staff, rushed to Seoul to prevent a collapse in the party. He brokered a deal to keep Kim from walking away.