Inaction on HMM leads to increase in sour bonds at KDB

Inaction on HMM leads to increase in sour bonds at KDB 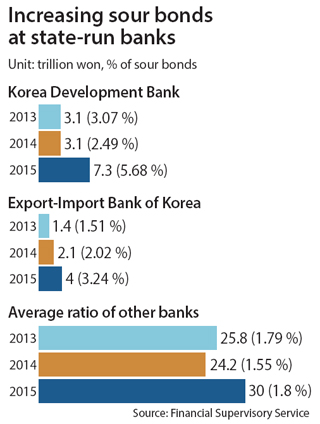 In the past three weeks, the amount of bonds issued by the state-run Korea Development Bank (KDB) that have gone sour ballooned by 1.4 trillion won ($1.2 billion).

Total defaulted bonds have now reached 7.3 trillion won, increasing the ratio of these bad bonds to healthy bonds to 5.68 percent. This is three times higher than the average ratio at commercial banks, according to data by the Financial Supervisory Service.

The reason was because KDB had to reclassify the loans it had issued to the troubled Hyundai Merchant Marine (HMM) as defaulted bonds.

As a follow-up, KDB decided to hold a meeting to seek an agreement among the company’s creditors concerning debt adjustment. Such a deal would not be legally binding but could effectively be considered corporate restructuring.

Market observers and experts, however, are saying the actions would be too little, too late.

“The bank missed its golden opportunity for restructuring the company because the government hesitated on concerns about possible impacts on the general election,” said Kim Sang-jo, head of Economic Reform Research and a professor at Hansung University. “The bonds were supposed to be included in the defaulted group from the beginning.”

The government has not been listening to creditors’ claims that the shipper is in need of restructuring. It has been considering allowing the company to restructure itself or go through an M&A.

The Ministry of Oceans and Fisheries and some other government agencies have been arguing that the government should protect the company. They suggested several M&A ideas for Hyundai Group, including the sale of Hyundai Securities. Some even proposed merging HMM with Hanjin Shipping or selling it to Hyundai Motor Group.

In the meantime, HMM’s debt has snowballed to further burden KDB.

The pace of corporate restructuring has been slower than the market expected for political reasons. As the general election nears, the government and state-run banks, who are the major creditors of large shipbuilders and shippers, are being pressured to postpone decisions that might affect companies’ operations by politicians who are running for office in districts where the companies are located.

Last year, then-Finance Minister Choi Kyung-hwan and the incumbent chairman of the Financial Services Commission, Yim Jong-yong, proclaimed they would speed up restructuring of so-called zombie companies, or firms that default on both their loan interest and principal. No tangible results have been achieved.

“A number of candidates for lawmakers are pledging to their voters that they will protect businesses for their regional economies, and they are opposing the restructuring plans,” said Kim Kwang-doo, chairman of the Institute for the Future of the State. “It seems like the government and financial authorities are less willing to push for their restructuring plans.”

DSME alone posted losses of 5.5 trillion won. The third-largest shipbuilder was to receive 4.2 trillion won from KDB and the Export-Import Bank of Korea on the condition that it restructure personnel in October. KDB said DSME would shed as many as 3,000 workers, but the plan fell apart due to opposition from the trade union.

Meanwhile, the number of struggling midsize companies is on the rise as state-run banks have postponed the salvaging of small businesses to deal with the problems of larger companies.