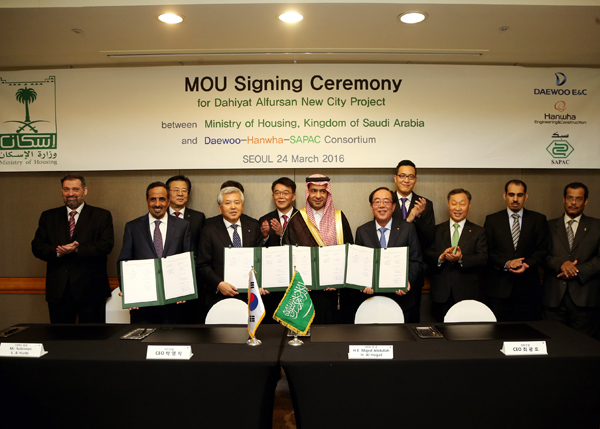 A consortium led by Hanwha Engineering & Construction (E&C) will build a new city in Saudi Arabia, which is trying to solve a housing shortage.

Hanwha E&C said Thursday that a consortium including Daewoo E&C and Saudi Pan Kingdom will build a new town in Dahiyat Alfursan, 14 kilometers (9 miles) east of the Saudi capital of Riyadh. The consortium will build 100,000 housing units and the city’s basic infrastructure in the next 10 years on about 38 million square meters of land, twice the size of Korea’s Bundang District in southern Gyeonggi. It will eventually be home to 600,000 people.

From 21 to 23 trillion won ($18 billion to $20 billion) is expected to be invested, making it the biggest overseas construction project ever won by Korean companies.

Representatives of Hanwha - including Hanwha President & CEO Choi Kwang-ho - Daewoo, and government officials from Korea and Saudi Arabia signed a memorandum of understanding at the JW Marriott Hotel in Banpo-dong, southern Seoul, on Thursday. Saudi Housing Minister Majed Al-Hogail and Korean Land, Infrastructure and Transport Minister Kang Ho-in were at the signing.

The deal will be finalized later.

The project is an ambitious one for Saudi Arabia as it tries to solve the country’s housing shortage. The government will raise the funds for the project, Hanwha said.

The Saudi population is about 30 million as of 2014, which is increasing at a rate of 1.5 percent per year, and six million people are currently living in Riyadh. The housing shortage around the capital is getting more serious as more and more people try to move to big cities like Riyadh.

“This is another meaningful project we are expected to run in the Middle East following the successful launch of work in Iraq,” said CEO Choi of Hanwha. “We will keep expanding our business in urban development in the region and in other emerging markets including Southeast Asia.” Hanwha is running the Bismayah New City project, worth $10.1 billion, in Iraq.

Daewoo E&C will bring its high-end engineering tech for the project. Since the 1990s, the company has completed many notable projects, including the Trump World Tower in New York and the Starlake City in Hanoi.