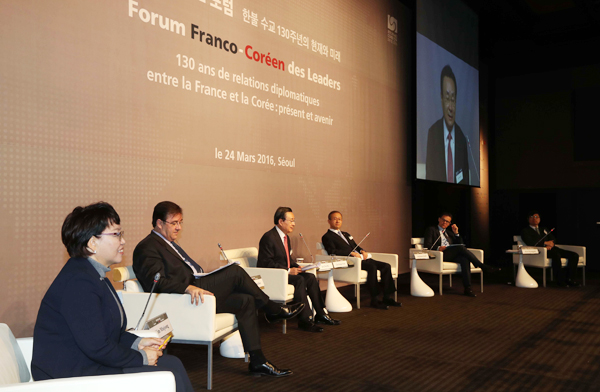 As regional and global trendsetters, Korea and France have ample room to enhance cooperation according to opinion leaders of the two countries at the inaugural Korea-France Leaders Forum in Seoul to mark 130 years of bilateral ties.

“Some 130 years ago, Korea and France signed the Treaty of Friendship and Commerce in 1886 and established diplomatic ties,” said French Foreign Minister Jean-Marc Ayrault in his keynote speech, emphasizing that the two countries have since entered a partnership that shares many common viewpoints on key global issues such as terrorism, nuclear proliferation, human rights and global climate change.

He added that France supports South Korea’s efforts to curb Pyongyang’s nuclear and missile threats through stronger sanctions, and that it is not time to be “passive” toward the North. The former prime minister also expressed gratitude for South Korea’s support of Paris following the terrorist attacks last November.

Ayrault stressed the importance of bilateral economic and cultural exchange, investment and further student exchange programs, adding that such people-to-people contact is “an investment in the future.”

The French diplomat also said no value can be placed on the word “friendship,” adding, “our special friendship needs to be maintained and developed.”

Some 150 leaders in politics, business, education, technology, culture and media from Korea and France took part in the forum held at the Hotel Shilla Seoul, part of the inaugural week to mark the “Year of France in Korea,” which officially began in a ceremony supported by the two countries’ governments the previous day. This yearlong anniversary celebration will run through December.

“France is an old friend that has been with us during difficult times, and of course during its process of rapid growth,” said President Park Geun-hye in a congratulatory message conveyed by Foreign Minister Yun Byung-se. “Furthermore, Korea and France are actively cooperating for an optimum partnership to produce new growth engines through the fusion of culture, industry and IT technology, which we hope will enable a more creative economy and a cultural flourishing.”

The “Annee France-Coree 2015-2016,” or France-Korea Year, was agreed upon during President Park’s state visit to France in November 2013. The Year of Korea in France began in Paris last September.

Yun, who was scheduled to hold his first strategic dialogue with his French counterpart later that day, added that Korea is the 11th largest economy in the world by GDP, recalling decades of bilateral economic cooperation such as in aircraft development in the 1970s, nuclear energy technology in the 1980s and the defense industry in the 21st century.

The forum was jointly organized by both countries’ Korea-France Club, the Seoul-based non-profit organization Corea Image Communication Institute (CICI) and the French Embassy in Korea.

“Since the establishment of diplomatic relations, France has become a partner that has provided steadfast support to Korea in the international scene,” said Hong Seok-hyun, chairman of the JoongAng Ilbo and JTBC and president of the Korea-France Club, in his opening remarks.

In the forum’s general session, Korean First Vice Foreign Minister Lim Sung-nam tackled 21st century challenges and cooperation in foreign affairs and security, pointing out that Seoul is open to dialogue with North Korea in the future, just not at this moment.

Arianespace’s Israel pointed to the importance of space technology in dealing with global crises, and said, “observation satellites can help manage crises in this unstable environment,” which could include areas such as global climate change or the admission of refugees.

They also held three closed-door sessions in the afternoon on how to strengthen economic partnership, encouraging cooperation between universities, expand cultural exchange and respond to societal challenges.