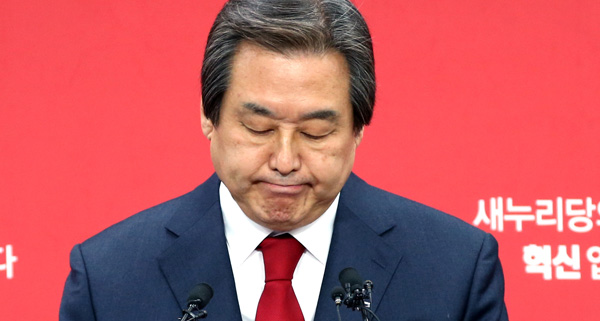 The ruling party’s chairman openly confronted a nomination committee on Thursday and challenged the integrity of its selection of candidates for five districts - all of them loyalists of President Park Geun-hye.

In a surprise press conference, Chairman Kim Moo-sung of the Saenuri Party claimed the nomination process for the April 13 general election was an embarrassment and unfair, forcing many devoted members to abandon the party. He then made the bombshell declaration that he was rejecting five candidates, effectively preventing the party from contesting those constituencies.

Since the ruling party started the process of selecting candidates in February, a deep fissure between Park loyalists and the rest of the party appeared. The nomination committee is chaired by a confidante of the president, Rep. Lee Han-koo. Skepticism of him and his committee’s choices snowballed as Park loyalists were given party tickets, while her adversaries were frozen out.

Over the past few days, many denied candidates abandoned the ruling party to run independently in next month’s election.

Kim said he was heartbroken to see such a reaction to the committee’s unfair selections and “collusion.”

Kim said he thought the best way to seek forgiveness from the public for such ugly political wrangling was rejecting nominations in five districts - Eunpyeong B and Songpa B in Seoul and Dong A and B and Dalseong in Daegu. They are still awaiting Supreme Council approval. Kim said he will not endorse them. Without the chairman’s endorsement, the candidates for the five districts cannot register their bids with the National Election Commission.

Kim also vowed not to chair a Supreme Council meeting until the end of the candidate registration period on Friday.

“The five districts, where the approvals are withheld, will be left without nominations,” Kim said.

The deadline to leave the party to run independently was Wednesday, so Kim’s move effectively blocks the five Park associates from running at all.

In Seoul’s Songpa B District, Yoo Yeong-ha, a former member of the National Human Rights Commission, was nominated. North Korea rights activist Yu Jae-gil was named to run in the Eunpyeong B District of Seoul.

After challenging the integrity of the nomination process, Kim said he made the decision to block the five candidates without consulting other Supreme Council members. He then immediately left for Busan, his hometown and constituency.

Enraged by Kim’s move, Park loyalists on the Supreme Council met and condemned him for “acting irresponsibly.” The council has nine members, and five are considered Park allies.

Rep. Won Yoo-chul, the floor leader, is the second-most powerful on the council. While Won has the right to act on behalf of Kim, the party only allows it in a legitimate emergency, such as an accident involving the chairman.

Kim’s move followed an exodus of key politicians from the party Wednesday after they were denied nominations due to animosity from the president. Four lawmakers made late-night exits from the party.

The most contentious nominations over the past weeks involved Rep. Yoo Seong-min.

Yoo was once very close to Park. He served as her chief of staff when she was the ruling party’s chairwoman in 2005. When Yoo, then a proportional representative, made a bid to run in Daegu’s Dong B District in a 2005 by-election, Park fully supported him, which contributed a lot to his victory. During Park’s failed run in the 2007 presidential primary, Yoo was her speech writer and policy maker. He did not hesitate to attack Park’s rival, Lee Myung-bak, throughout the campaign.

Their relationship, however, first saw a crack after Park lost the primary. During the 2012 presidential campaign, Yoo openly criticized her decision to change the party’s name from the Grand National Party to the Saenuri Party.

Tensions between the two reached a new peak after Yoo was elected floor leader in February 2015 based on a pledge that he would change the way the party does business with the Blue House. Later that year, Park publicly condemned him for the “politics of betrayal” over a political deal he brokered with the opposition to pass her public pension reform bill. Yoo resigned from the floor leader post and became an icon of resistance to the president.

After Yoo declared his bid to run for a fourth term in Daegu Dong B, Park loyalists opposed awarding him the nomination. They said Yoo has a different ideology and philosophy from the ruling party. The nomination committee subsequently delayed its decision on Yoo’s fate until Wednesday night, a strategy designed to squeeze him out of the party.

Yoo held a press conference at 11 p.m. Wednesday in his campaign office in Daegu to announce his decision to quit the Saenuri Party and run as an independent. In his announcement, Yoo made clear that he was the victim of Park’s vengeance. “Power cannot defeat the people,” Yoo said. “Even if those in power abandon me, I will walk my path to serve the people.

“Throughout the nomination process, the party failed to show justice, common sense and any kind of principle,” Yoo said. “It just made shameful, archaic political retaliations.

“Having my faith in the constitution, I will leave my beloved party today,” Yoo continued. “And I will run for the sake of justice.”

Yoo also said he felt heartbroken to see his allies deprived of nominations because of their ties to him. “I will return to the party with them and accomplish my dream of reforming the conservatives,” he said.

Meanwhile, the nomination crisis and exodus of disgruntled lawmakers reduced the Saenuri Party’s presence to 146 seats in the current 292-member National Assembly. It is the first time that the party lost its majority in the legislature since 2008.