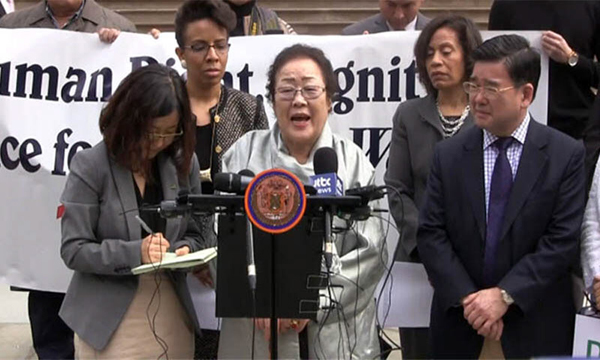 It was in front of New York City Hall that I met 88-year-old Lee Yong-soo, a victim of Japanese wartime sexual slavery, again on March 8. New York City’s politicians were calling upon the Japanese government to acknowledge responsibility and officially apologize for the comfort women issue. Ms. Lee had a full schedule in New York; that afternoon, she had a news conference at the United Nations headquarters.

The next morning, she met with students at Northeast Asian Social Justice program at the Holocaust Center of Queensborough Community College. When Ms. Lee testified that she had been taken at night and made a comfort woman, students showed tears. One sophomore said it was shocking and heartbreaking. A senior named Tamika Edwards said she felt for the pain and suffering of the victims. The students agreed that when the information is only shared among a few people, it can easily be forgotten. Tragedy needs to be broadcasted.

Recently, the California State Senate and Los Angeles City Council honored Ms. Lee with a special award. During the ceremony, Lee said it wasn’t money the victims wanted, but the same seven demands they’ve been making for the last 25 years: Japanese’s acknowledgement of its wartime sex slavery system, an investigation of the facts, an official apology from the Japanese Diet, legal compensation, indictment of the criminals, thorough education and the establishment of a memorial monument. These demands are hardly unreasonable.

But the Japanese government resumed its distortion of key facts. A Japanese foreign ministry official denied the coercive nature of comfort women at the U.N. Committee on the Elimination of Discrimination against Women in mid-February.

On March 2, foreign minister Yoon Byung-se spoke at the U.N. Human Rights Commission in Geneva, but did not mention comfort women at all. On March 15, Minister of Gender Equality and Family Kang Eun-hee attended the U.N. Commission on the Status of Women in New York. But she did not discuss comfort women either. When an old victim herself is appealing to the conscience of the world, the government has dropped the ball.

The government may think the issue is undiplomatic, but the two nations’ agreement only states that they will refrain from attacking each other.

The Korean American Civic Empowerment for Community is working on a text about comfort women that can be used at public schools in the United States. However, the group is struggling to raise the $50,000 needed to fund the project. They’ve requested to meet with the minister of gender equality whenever the minister visits New York for the U.N. meetings, but so far they haven’t been successful.

Protecting history is a challenge, especially since the current Japanese government seems unwilling to record history correctly and teach truth to its younger generations. History cannot be defended if those trying to defend its truths aren’t strong. Why then isn’t the Korean government more active?