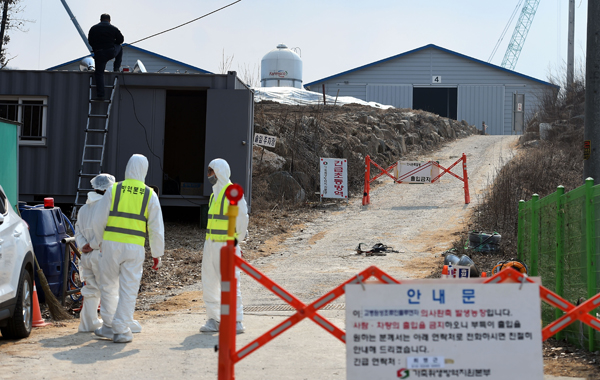 Quarantine officials perform an epidemiologic investigation Saturday afternoon to determine how ducks in a poultry farm in Icheon, Gyeonggi were infected with avian influenza, a deadly epidemic for birds. Ducks in the farm were culled and the entrance to the farm was closed down. [NEWSIS]

The Ministry for Agriculture, Food and Rural Affairs announced ducks at a poultry farm in Icheon have tested positive for a virulent strain of AI and subsequently poultry exports will once again be blocked, raising concerns that Korea will likely be designated a region with frequent outbreaks of animal diseases, along with China, Vietnam, and Hong Kong.

It has been only one month since the World Organization for Animal Health (OIE) designated Korea an AI-free nation on Feb. 28, after which Korea resumed exporting chickens to Hong Kong.

In order to become an AI-free nation, a country must have no AI outbreaks for three months after the last culling nor any evidence of virus circulation.

Following the confirmation, the exports of duck eggs produced in Gyeonggi has been suspended after it had resumed selling eggs overseas for the first time in two years.

The Ministry said 11,600 ducks were culled and the farm is now under quarantine. Furthermore, the Ministry also quarantined poultry industry workers in Gyeonggi, 115 poultry farms, two slaughter houses and 12 feed factories for 36 hours from Sunday to Monday.

The quarantine protocol also prohibits carrying ducks and eggs to other areas, a prohibition that will remain in place until April 2.

The Icheon city government said it will run an emergency system around-the-clock until the city confirms there is zero possibility of the virulent virus spreading.