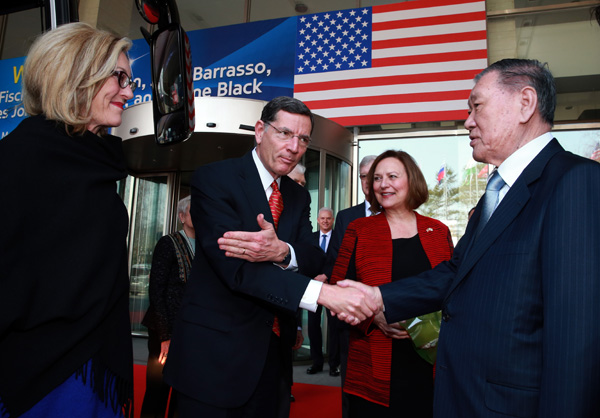 Members of the U.S. Congress visited the Namyang R&D center of Hyundai Motor, the nation’s No. 1 automaker, in Hwaseong, Gyeonggi, in order to better understand Korea’s auto industry on Monday. The chairman of Hyundai Motor Group, Chung Mong-koo, accompanied the tour.

After their first visit to Japan, where they examined the nation’s railroad industry, the group headed to Korea’s largest domestic automaker’s research hub. After consulting with Chung Mong-koo, head of the giant automaker, the members then went on to test drive an EQ900, Hyundai’s first luxury sedan under its Genesis brand. They also test drove various eco-friendly models, including the recently released Ioniq electric and Niro hybrid sport utility vehicle.

“We are focusing on combining information and communication technology with electronics technology to develop autonomous cars and environmentally friendly vehicles for the future,” Chung said, explaining some of the company’s ambitions during the tour.

The United States has been Korea’s most important trading partner for years, and March 15 marked the fourth anniversary of the free trade agreement between the two countries. Hyundai Motor and Kia Motors both peaked in sales in the U.S. auto market last year, selling a total of 1.39 million cars, a 6.2 percent increase year on year, according to the company.

This year, exports of automobiles and auto parts are expected to increase even more since export tariffs on cars to the United States, previously set at 2.5 percent, will be eliminated this year according to signed free trade agreement terms.

“Efforts of Hyundai and Kia Motors to develop futuristic cars will serve as a supportive engine to place the two as leaders in the world’s future automotive market,” Senator Barrasso said.

The U.S. representative group will finish their tour in Korea on Wednesday and leave for Australia.