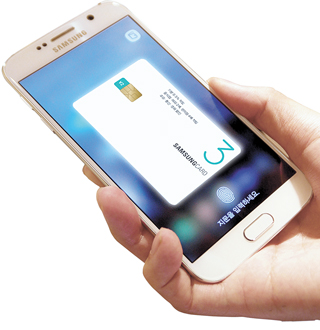 Samsung Electronics said on Tuesday that it has joined with bank card giant China UnionPay to launch its mobile payment platform Samsung Pay in China.

“We are pleased to be partnering with China UnionPay to bring Samsung Pay to China,” said Injong Rhee, executive vice president and head of R&D, software and services at the mobile communications business of Samsung Electronics. “We ultimately want to make Samsung Pay available to as many consumers as possible in China.”

Samsung Pay is now available on the Samsung Galaxy S7, S7 Edge, S6 Edge Plus and Note 5 smartphones in China, and Samsung plans to add additional midrange models in the future. The platform currently supports select credit and debit cards from nine Chinese banks, including China CITIC Bank and China Construction Bank. Six other banks, such as the Bank of China, are scrambling to join.

“With the joint efforts of banks and Samsung, based on the safety testing and certification by China’s national testing agency, UnionPay QuickPass supporting Samsung Pay’s service will bring users a safer and more convenient mobile payment choice,” said Hu Ying, the assistant president of China UnionPay.

Samsung’s foray into the mobile payment ecosystem in the world’s biggest smartphone market means it will face stiff competition from archrival Apple’s payment system and Google’s Android Pay, not to mention home-grown systems backed by local giants Alibaba and Tencent.

Apple Pay, which began its service last month with 15 Chinese banks, has been well received so far. Media reports say over 300 million users registered their credit card information to use the service on the first day of the launch. But one positive factor for Samsung is that 85 percent of Chinese smartphone users still use models powered by Android, which doesn’t support Apple Pay.

The combination of near field communication and new magnetic secure transmission technology makes Samsung Pay compatible even with payment terminals designed for traditional cards. To make payments, users simply swipe from the bottom of their screen and scan their fingerprint.