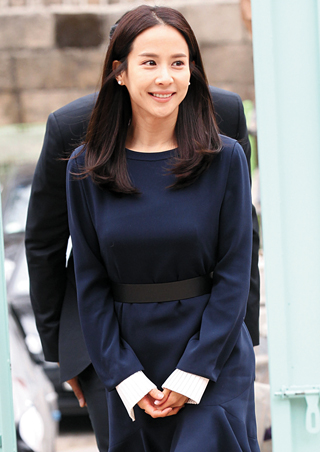 Recently the KBS2 drama “Babysitter” came to an end with overwhelming acclaim for the lead actress, Cho.

The actress simply nailed her character Chun Eun-ju’s emotional breakdown after witnessing her husband’s fading faith in her. She nailed it to the point where audiences could not get enough of her in just four episodes.

Critics say Cho has become a paragon of acting, noting that her impact was the pivotal factor that turned the criticism surrounding drama at the beginning to cheers by the time it wrapped up. Considering how short a time frame the star had to pull off such a feat, she may be very deserving of all the praise.

Q. Acclaim for your acting is flooding in. How do you feel?

A. I am running out of words to describe how grateful I am. I was overwhelmed with concern when I first learned about the role I was to play. But once I stepped onto the set, ironically, I was calm and felt extremely natural acting. Fortunately, my good feelings did not fade through the end of the shoot.

Did the drama “Babysitter” have something different from the other dramas that helped elevate your acting skills?

The circumstances were set up in a way that I could focus on just acting. There was this typical tension on the set that kept me on my toes. The director always checked with me to stay on the same page as well.

Although it eventually turned into praise, at the beginning of the drama, there was some criticism. The whole drama was only four episodes long, too. Were you disappointed in anything?

I do wish it would have been a bit longer than four episodes. Well, Chun appears in practically every scene, so it was, as a matter of fact, pretty grueling. But now that it’s over and I look back, I feel like the drama could have delved deeper into individual characters if it consisted of more episodes.

But a short drama does have its upsides, after all. You get to leave a stronger impression, which may last even longer than with the longer dramas. Plus, for those who want to revisit the drama, there are only four episodes to watch. It only takes one workday (laughs).

Many fans are already screaming for your return. Any plans set up yet?

Whenever I run into an overwhelming and extremely challenging drama, I want to jump on board nonetheless. Those are the dramas I hope to be part of.

Any words for the fans?

Being able to work on a great drama with a great director at a great time was amazing. I was afraid of slipping up and making mistakes with the busy schedule, but it ended up all great. I could not be happier to receive such accolades and love from the fans. I will continue to work hard and come back with the next big film or drama.