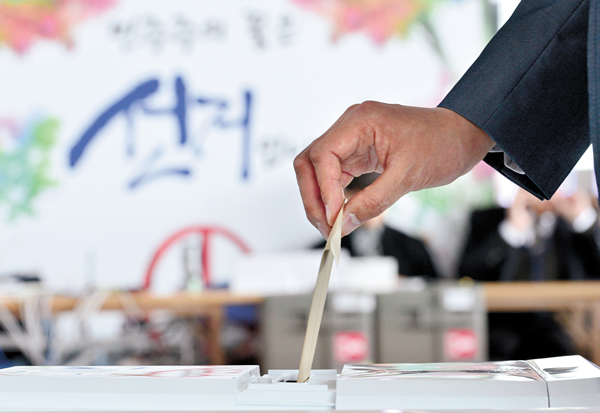 People in their 40s hold the swing vote in many constituencies in the upcoming April 13 general election, according to a recent poll conducted by the JoongAng Ilbo and Embrain.

But how they vote is not as predictable as voters younger than them, who support liberal candidates from the Minjoo Party of Korea and People’s Party, or the highly conservative voters older than them, who favor the ruling Saenuri Party.

The survey released Monday was conducted from March 20 to 26 in 14 constituencies.

The biggest voting bloc in terms of age is people in their 60s or older, which represent 23.6 percent of registered Korean voters. People in their 40s are the second biggest with 21.5 percent.

“People in their 40s in this country shoulder the economic burden of education of children, supporting parents and preparing for old age at a time of employment instability, so they show a tendency to vote based on practical concerns,” said Jeong Han-wool, a professor at Korea University’s Peace and Democracy Institute. “Unlike people in their 20s and 30s, who mistrust politics, and those in their 50s and 60s, who pursue economic stability, they do not lean conservative or liberal.”

Two key races in Seoul show how the 40s generation has unpredictable loyalties.

According to the poll, in the Mapo A District race, incumbent lawmaker Noh Woong-rae of the Minjoo Party is in the lead with 41.9 percent of overall votes compared to 27.5 percent for the Saenuri Party candidate, former Supreme Court Justice Ahn Dae-hee. Independent candidate Kang Seung-kyu, a former lawmaker who represented Mapo A, drew 10.5 percent of support. 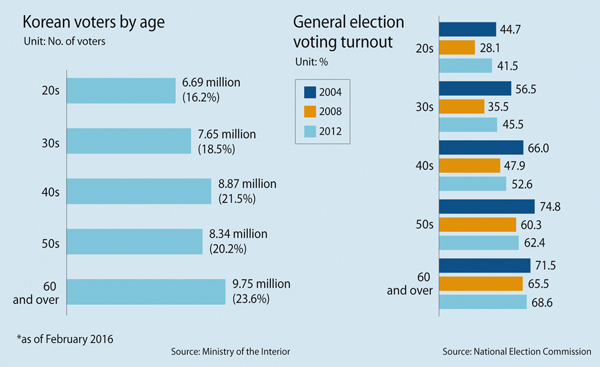 Noh’s lead comes from people in their 40s, with 48.8 percent of people in that age bracket supporting the Minjoo Party candidate compared to 19.7 percent for Ahn and 12.9 percent for Kang. Some respondents did not name a candidate.

In Dongjak B District, young people between the ages of 19 and 30 showed strongest support for the Minjoo Party’s Heo Dong-jun, while people over 50 favored incumbent Saenuri lawmaker Na Kyung-won. Unlike in Mapo A, it is the Saenuri candidate that is favored by people in their 40s, with 54.4 percent of people in that age bracket. As a result, of all voters, Na has 47.8 percent support, compared to 19.2 percent for Heo and 6.9 percent for the minor opposition People’s Party candidate Jang Jin-young.

“People in their 20s and 30s are critical of the government and ruling party because of the employment crisis, while the Saenuri Party is supported strongly by those in their 50s,” said Kang Won-taek, a political science professor at Seoul National University. “In comparison, those in their 40s are sensitive to their economic conditions and job security. People in their 40s hold the key to victory in each constituency.”

Despite that fact, the ruling and opposition parties generally devise campaign strategies targeting voters in their 20s and 30s, or 50s and 60s. They rarely come up with strategies aimed at people in their 40s.

In the past, people in their 40s maintained a higher voter turnout than the overall average. But in 2012, the 40s age bracket saw a turnout of 52.6 percent, less than the average total turnout, which was 54.4 percent.

Meanwhile, voting for the general election kicked off for overseas Korean nationals on Wednesday in other countries.

Overseas Koreans can cast their ballots for six days through April 4 at 198 polling stations in 113 countries, according to the National Election Commission.

There are 154,217 Koreans abroad who are registered to vote. They comprise a little less than 8 percent of all registered voters.