Saenuri chairman to step down after election

Saenuri chairman to step down after election 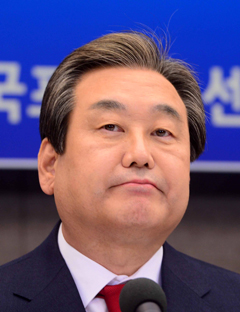 Kim Moo-sung, chairman of the ruling Saenuri Party, is questioned on Wednesday by the Kwanhun Club, an association of senior journalists, at the Korea Press Center in central Seoul. [NEWSIS]

“I’m resigning early because I couldn’t keep my promise to conduct an open primary nomination process,” Kim said at the Kwanhun Club, an association of senior journalists.

Kim added that he is taking responsibility for the “complete chaos” that ensued within the party with regard to the nomination process, which made the party appear “split in its mentality.”

Bickering over the nomination procedure with President Park Geun-hye loyalists since February, Kim announced at the Kwanhun Club on March 24 his decision to veto five candidates approved by the nomination committee, which is dominated by Park loyalists.

In political circles, Kim is often portrayed as the leader of a group of people who are not Park loyalists, thus his outspoken support for open primaries where the pro-Park faction may have a harder time landing their own people. Kim’s chairmanship was scheduled to end July 13 this year; with his announcement, the party will have to hold a convention to elect a new chairman at least a month earlier than previously planned.

Some pundits are reading his announcement as a strategy to solidify his candidacy prospects in next year’s December presidential election. Saenuri Party regulations stipulate that those who wish to run for president need to resign from their current position at least one-and-a-half years before the election, which would be June 19 this year.

When repeatedly asked if he has any intentions to run for presidency, Kim said, “I will not answer to that question,” but later added, “I have many flaws preventing me from pursuing a path like that.”

Kim’s decision to veto the five candidates approved by the nomination committee meant that a Saenuri party candidate was not nominated for Daegu Dong B District, where Rep. Yoo Seong-min, a former Saenuri lawmaker who left the party after the committee did not nominate him, is running as an independent.

When asked about this, Kim answered, “I made that decision because I thought otherwise it would be impossible for the party to win a majority in the election.”

The general election campaign officially commenced today. A total of 198 international voting centers in 13 countries will be available until April 4 for the country’s 154,217 overseas voters.