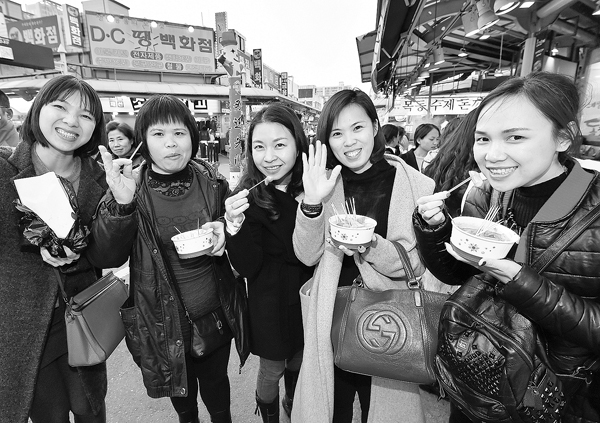 6,000 employees of Aolan International Beauty Group came to Incheon as an employee reward trip. Popular Korean TV show “My Love from the Star” was shot in Wolmido, Incheon, and the Korean chicken and beer party attended by 4,5000 people was a great hit. Just as Incheon Mayor Yoo Jeong-bok said, the visit opened a chance to turn Incheon into a tourism mecca.

Incheon deserves applauses for positively stimulating the slumped local economy by hosting the large Chinese tourist group. However, there was also criticism that the noisy event was not very profitable. We still have a long way to go, and we’ve found many areas to be improved and supplemented.

I revisited the route that the Chinese tourists toured in the last few days, and people said that they were regrettable parts to the otherwise successful event.

Moraenae traditional market was one of the sights that the group visited, and the merchants prepared for the visit for a week. The merchants’ association spent 2.5 million won ($2,185) to book a performance troupe and put up signs to welcome the tourists.

However, the Chinese visitors took a few photos and bought some inexpensive snacks such as rice cake, fish cake and strawberries. They spent about 20 minutes and left. Head of the merchants’ association said, “They didn’t have much time, and when the tourists were opening their wallets, the tour guide rush them, so they didn’t buy anything.”

Seoksan, where the popular drama was shot, had a few photo zones and lacked other attractions. Some visitors found it “boring.”

Incheon University, also a location of the drama, learned that it was included in the tour course from media report. A university official said that it was regrettable that no previous arrangements were made. Shortage of accommodation was also a problem. As Incheon hosted Aolan Group, only 1,500 rooms in 27 hotels in Incheon were reserved. It was not enough, so more rooms were reserved in Seoul and Siheung, Gyeonggi.

Aolan Group also complained that the employees were staying at too many different hotels. Interpretation was offered through the tour guides, so the visitors couldn’t enjoy personal time and didn’t have much time to spend money.

Incheon says that the Aolan Group is the beginning and it will host more Chinese tourist groups. “Incheon will become a city tourists want to visit again.”

If Incheon wants to become a tourism mecca, it should take the advice of Kim Song-won, secretary general of Incheon Citizens Coalition for Economic Justice. “If Incheon wants to continue to host large tourist groups, it needs to expand lodging facilities to accommodate the volume. Also, food, attractions, activities, and convenient shopping should be provided, and tourism products and courses with storytelling need to be developed.”