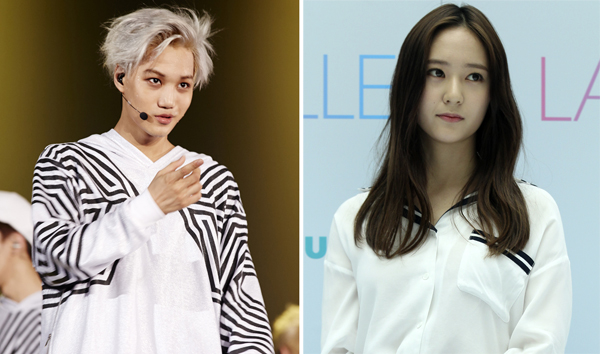 Kai, a member of the idol group Exo, and Krystal of the girl group f(x) are dating.

Their mutual management agency, SM Entertainment, confirmed on Friday the couple’s rumored relationship, sparking all kinds of reactions from fans.

Due to the close relationship between the two K-pop stars, many fans had been suspecting that the two were dating. Photos of the two together have been often released online by witnesses, raising the level of speculation.

According to agency, despite their long tenure as singers for the same company, the relationship became romantic only recently.
Krystal joined the agency in 2006, and Kai did so just a year later.

Krystal, since her debut as a member of f(x), has released many hit songs like “Nu ABO” and “Electric Shock.” Kai, along with his bandmates, broke into the music scene in 2012 and has been riding high since.

Exo won many awards last year and earlier this year at various music festivals, including the grand prize at the Seoul Music Awards held in January.