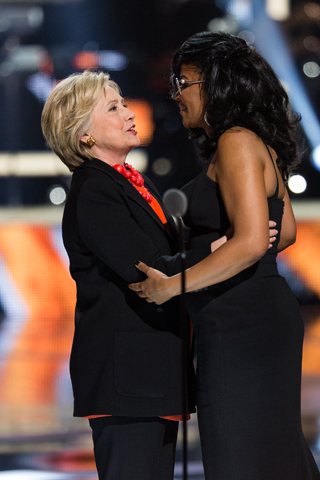 NEWARK, N.J. - Pop star Rihanna and TV mogul Shonda Rhimes were among the honorees at this year’s Black Girls Rock! event, where Hillary Clinton made an appearance and told the audience “my life has been changed by strong black women leaders.”

The Friday night event was taped at the New Jersey Performing Arts Center in Newark. The special will air on BET on Tuesday.

“There are still a lot of barriers holding back African-Americans and black women in particular, so a gathering like this filled with so many powerful, strong women is a rebuke to every single one of those barriers,” Clinton said. “All of our kids, no matter what zip code they live in, deserve a good teacher and a good school, a safe community and clean water to drink.”

Another who earned loud applause was Rihanna, the final honoree of the night.

“Thank you so much for celebrating us in a world that doesn’t celebrate us enough,” she said onstage.

“The minute you learn to love yourself you will not want to be anybody else,” the Grammy-winning singer and fashion trendsetter added. “Role model is not the title they like to give me ... (but) I think I can inspire a lot of young women to be themselves and that is half the battle.”

The Barbados-born singer also thanked her mother and grandmother for being strong black women and excellent role models.

“Hopefully one day I’ll be raising my own little black girl who rocks,” she said.