Korea's sports organizations give back to fans

Korea's sports organizations give back to fans 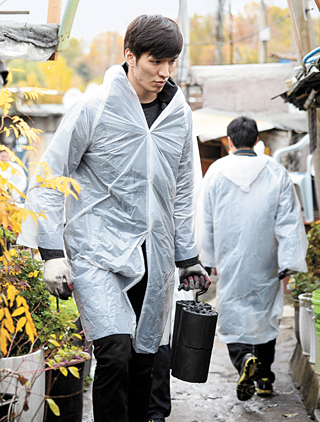 Goyang Orion Orions center Jang Jae-seok, who was suspended for 20 KBL matches due to gambling while in college, carries coal briquettes. Delivering coal briquettes to underprivileged households is one of the initiatives promoted by the KBL.[KBL]

Professional sports in South Korea have made exponential progress in the past two decades, in large part because of the support of local fans.

In February, the K-League initiated a campaign to get their players, managers, referees and others affiliated to sign up as organ donors. Approximately 1,200 members of the K-League agreed, and many also became certified to give CPR.

“The initiative was agreed upon during the first directors meeting of the year in January,” said a K-League spokesperson. “The intention behind the historic step is to return the support and love the K-League has received by the fans.

“We are aware that many people need donated organs and we want to be leaders in Korean society in this field. We hope our example can improve society’s opinion about organ donation,” the spokesperson added.

The K-League has also taken an interest in community engagement. Staff from 19 K-League teams visited J-League clubs in Japan to understand how they interact with their surroundings. Teams like Matsumoto Yamaga FC, Shonan Bellmare and JEF United Ichihara Chiba are all considered exemplary models of this.

The city of Matsumoto, for example, has been called a “football wasteland” because it hasn’t produced a single star footballer, but that hasn’t stopped Matsumoto Yamaga FC from cultivating an incredibly dedicated fanbase among locals. The team has done this by emphasizing the history of the city and turning itself into a source of local pride and entertainment in an otherwise quiet region. Its efforts have been rewarded by a marked increase in game attendance. Within seven years, average attendance per game increased by 450 percent, from a mere 2,000 in 2007 to 11,000 by 2013. The team was rewarded with a promotion to the first division of the J-League in 2015. While it was relegated to the second division at the end of the season, this was still a testament to how far it had come. The team shows how a club’s efforts to integrate itself into its community can benefit both parties. 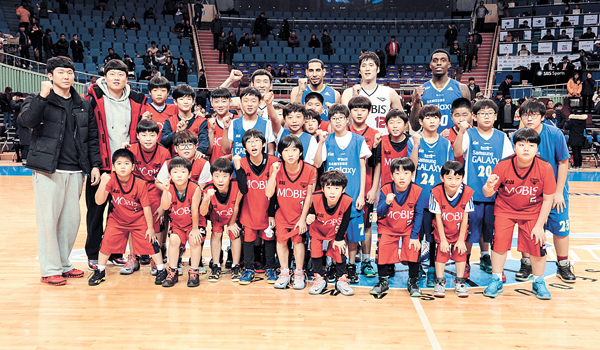 KBL’s Ulsan Mobis Phoebus and the Seoul Samsung Thunders invited local kids to their game on Nov. 26, 2015. Supporting young people has been one of the KBL’s most significant initiatives over the years. [KBL]

The KBL, on the other hand, has been focused on supporting local kids. For the past nine years, the KBL has been hosting a nationwide youth basketball tournament in which 40 elementary school teams and 10 middle school teams compete. The purpose is to get more young people interested in basketball and leave them with unforgettable memories of the sport.

Another initiative by the KBL is the delivery of coal briquettes during winter to underprivileged neighborhoods in Seoul and nearby cities. In November 2015, several KBL players who had been suspended for things like gambling also participated as a way to apologize for their misdeeds.

Korean Volleyball Federation (KOVO) has also been giving back. In one example, they sold limited-edition dolls during the All-Star game and donated all profits to United Nations Children’s Fund (UNICEF). Last year, KOVO players participated in a one-day fire prevention education program and donated mini fire extinguishers worth 10 million won ($8,688).