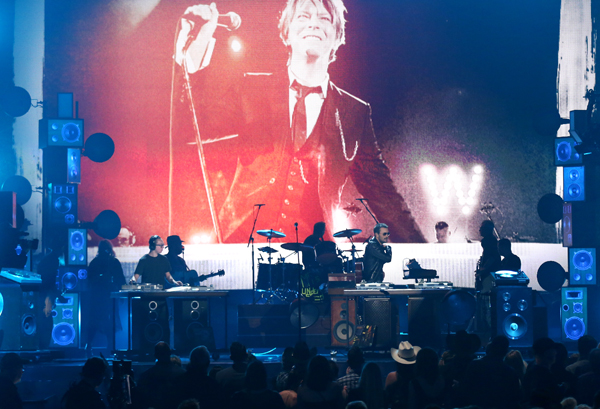 At the Academy of Country Music Awards, Eric Church paid tribute to rock icons David Bowie, The Eagles’ Glenn Frey and other late stars during his performance.

Church intertwined songs from the singers during his performance Sunday, as well as songs from late performers Lemmy Kilmister of Motorhead and former Stone Temple Pilots frontman Scott Weiland at the MGM Grand Garden Arena in Las Vegas.

Host Luke Bryan introduced Church and said the performer was a big fan of vinyl records and was set to pay tribute to “four of his musical heroes.’’ Church performed the track, “Record Year.’’

Carrie Underwood earned loud applause after singing “Church Bells.’’ She was nominated for female vocalist of the year, but lost to Miranda Lambert.

“Carrie you just killed it. She is literally the perfect singer,’’ Lambert said onstage. “I’m really excited for women in country music.’’