Exo’s leader takes a crack at the movie biz

Exo’s leader takes a crack at the movie biz 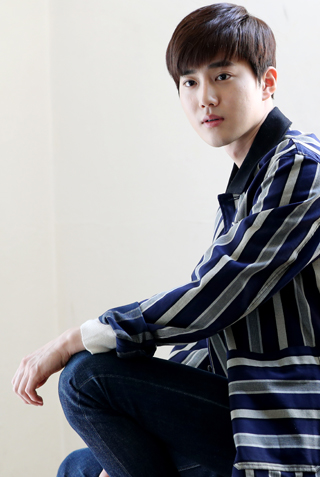 Suho, the leader of K-pop phenomenon Exo, is stepping out of the recording studio and onto movie sets.

The 24-year-old, whose real name is Kim Joon-myeon, recently made his big screen debut in “One Way Trip,” where he plays Sang-woo, a 20-year-old who takes a spontaneous day trip with three of his best buddies before performing his mandatory military service.

But an unexpected accident occurs, throwing everything into question. Police and parents get involved, and nobody seems to be siding with the kids.

“I wanted to do a weighty project that includes a social message for my first film,” said Kim in a recent interview with Ilgan Sports.

“I wanted to do a film that conveys a message that will stick with the audience for months. This is what I want to do in the future as well,” said Kim

The following are excerpts from that interview.

Q. Why did you decide to participate in the film?

A. I’ve always wanted to do a film for young people. Ever since I greatly enjoyed watching “Spirit Of Jeet Keun Do - Once Upon A Time In High School” (2004) and “Bleak Night” (2011), both of which are coming-of-age films, I wanted to make my big screen debut through something similar. My character Sang-woo and his three buddies are full of hopes and dreams being just out of high school. I was like that, too, at that age. I thought there was nothing I couldn’t do. However, being out in the real world for a while, I realized that there are things that cannot be achieved. I kind of miss those times when I was clueless and think those times were actually better. I could not help but feel sorry watching these four guys gradually changing to suit the desires of adults.

This is your first role as an actor, and it has taken you a while, considering that you debuted in the entertainment scene in 2012 as a part of Exo. What took you so long?

When I first set my foot in the showbiz industry, I thought I would debut even later. You know Byun Yo-han, with whom I studied at Korea National University of Arts, rose to stardom when he turned 30. And there still are a lot of people who are older than me still knocking on doors in this world. So in that sense, I don’t think I made my silver screen debut late. What is important is not when you start it but how you start it. I’ve waited patiently until the right project came along.

You have an image as a very responsible and serious person, probably because of how well you have done your job as the leader of Exo. Your character Sang-woo also matches your image. Didn’t you want to break out of that shell?

That is why I wanted to take Ji-gong’s part which is played by Ryu Jun-yeol. I wanted to show a wider spectrum, but in the end I got the part of Sang-woo. When picking my next project, I want to do a villainous role just like Yoo Ah-in’s part in “Veteran” (2015). If I could deliver that kind of character well, it would definitely shock my fans and others who don’t know me that well.

Are you also strict on yourself in real life?

I drink alcohol maybe five times a year and I go to the gym once every two days. I barely eat carbohydrates. I think I eat a single bowl of rice per day. I’ve been keeping this lifestyle for almost a year. When I decide I have to do something, I usually keep my word.

Do you have anything planned for your next film project?

I don’t have anything concrete but I do have a dream. I watched tvN’s drama “Misaeng” two times because it had Yo-han in it. Recently I watched the hit cable drama “Signal” three times because it not only had Lee Je-hoon, who went to the same school as me, in the lead, but also because I respect Cho Jin-woong so much. I heard that its second season is being planned, and I really wish to be part of it, even as a sidekick.