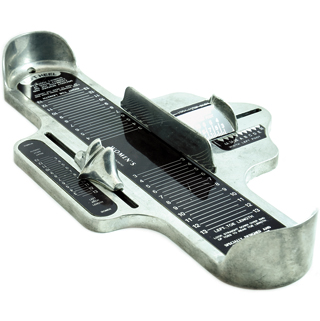 Koreans’ feet are getting bigger, according to Kumkang, one of the nation’s leading shoe and apparel companies.

The average foot size of Koreans has increased 10 millimeters (0.3 inches) compared to two decades ago, according to the study released on Monday.

The company said that the best-selling shoe size for male customers was between 260 and 265 millimeters, last year. Shoes in this size accounted for 40 percent of total sales. Twenty years ago the most popular shoe size was between 250 and 255 millimeters, which at the time dominated with 39 percent of total sales. During the same period, sales of shoes that are 270 millimeters or larger increased from 11 percent to 17 percent.

The same trend is also found in women’s shoes. In 1995 women’s shoe sizes between 230 and 235 millimeters accounted for 51 percent to total sales. Women’s shoes in this category shrunk to 45 percent last year.

Sales of the larger size, between 240 millimeters and 245 millimeters saw sales increase from 36 percent in 1995 to 42 percent last year. According to the shoemaker, sales of 280 to 310 millimeter shoes for men and 255 to 260 millimeters for women surged 28 percent year-on-year in the first quarter of this year.

Other retail outlets are seeing increased demand for bigger sized fashion items. In Auction, an online open market service platform, sales of big-sized segment apparel, such as XXL, grew 27 percent in the first quarter compared to last year. Menswear brand SIEG, for example, saw sales of its extra-large outfits exceed 30 percent last year. In 2014, the category only accounted for 13 percent.

“As the foot size of domestic consumers grows, we will put more weight on big size shoe production and expand the number of specialized shops for them as well,” said a spokesman from Kumkang Shoes. “We forecast the size of the local consumers’ foot will continue to grow and plan to put focus on developing designs that better fit new needs.”

Kumkang plans to expand the number of specialized shops for big and small clothing, from its 15 BIG&small stores nationwide and also add new line-ups in each store.