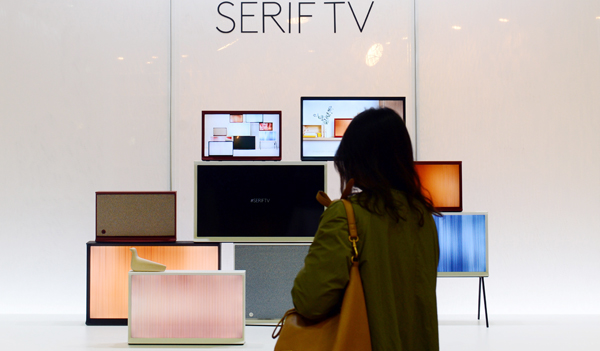 Samsung has exhibited a few previous TV models at furniture shops but this is the first time it has formally collaborated to reserve space for a new TV.

Serif TV was designed by the Paris-based Bouroullec brothers, who have worked together on architectural projects, domestic and office furniture and even home accessories. They have been involved in design projects with Vitra, a revered Swiss furniture company. This is the first time they have designed a consumer electronics product.

“Like typographers designing a letter, we studied both the object and its interaction with the space around it,” said Erwan. He said the TV is an “object” that has harmonized technology and design.

Coming in three display sizes - 24, 32 and 40 inches - the Serif TV resembles a picture frame and can stand on legs or be put on a bookshelf or table. It comes in white, dark blue and red. The largest 40-inch model, equipped with an ultra high-definition monitor, is priced at 1.99 million won ($1,735), about four times more expensive than conventional Samsung UHD TVs of the same size.

The new TVs were assembled in Europe and launched there first.

Serifs will be exhibited at 12 premium furniture outlets including Duomo, Dansk, Infini and Mobel Lab and orders can be made either on the Samsung web site or at 10 Corso Como, a luxury shop in southern Seoul. Only the 32-inch and 40-inch models are available in Korea.