Separating mothers and infants can be harmful

Separating mothers and infants can be harmful 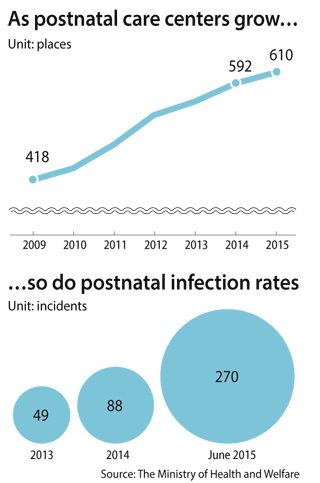 In a postnatal care center in Seongnam, Gyeonggi, a nurse is taking care of three to four babies while the mothers, in separate rooms, observe them through a monitor connected to a CCTV installed on the ceiling of the infant’s room.

“The mothers can check the conditions of their babies whenever they want through the television in their room,” said the director of the postnatal center, who refused to be named.

Many mothers in postnatal care centers in Korea stay in single rooms, separated from their newborn babies, and see them only once every two hours for breastfeeding. Mothers who don’t breastfeed stay with their babies less than four hours a day.

“It’s possible for the mothers to stay in a room with their babies, but most chose to be separated,” said the director.

In other postpartum care centers, single rooms for mothers are equipped with luxuries such as sitz baths, in which mothers can take relaxing waist-deep soaks, or participate in different activities provided by the center, such as yoga. During their two weeks stay, most of the babies were all kept in a different room.

According to a survey by the Ministry of Health and Welfare, only 0.5 percent of the nation’s 600 or so postnatal care centers allow mothers to share a room with their babies, while in 59 percent, mothers spend less than 4 hours with their newborn children.

“The service provided by postnatal care centers are heavily centered around the mother’s need, and neglect that of the infants, which is to stay with their mothers,” said Shin Son-moon, a professor in the pediatrics department at Cheil General Hospital and Women’s Health Care Center. “This goes against the United Nations’ Convention on the Rights of the Child, which puts the interests of children above anything else. It’s proven through research that infants who stayed with their mothers in a room were more emotionally stable compared to those who were separated.”

The Ministry of Health and Welfare said Thursday it will include a clause in the Mother and Child Health Law, mandating postnatal care centers to operate rooms that can be shared by mothers and newborns, so as to create a favorable environment for infants.

The clause will be added in Article 15-4 of the Mother and Child Health Law, which stipulates requirements postnatal care centers have to observe. The ministry said it will also include measurement criteria concerning the conditions of such rooms in the evaluation of postnatal care centers, which will be conducted every three years.

Another reason the Ministry of Health and Welfare is trying to have babies share a room with their mothers is to reduce the occurrence of mass infection in postnatal care centers, as the number of infection accidents in postpartum care centers has skyrocketed from 49 in 2013 to 270 in 2015.

“It’s very likely for mass infections to happen when newborn babies stay all together in a room,” said Woo Hyang-je, director of the Ministry of Health and Welfare’s Childbirth Policy Division. “It’s favorable for the mothers and the babies to conduct postnatal care within the same room since it makes breastfeeding and emotional bonding between the two easier.”

This, however, isn’t the ministry’s first legal initiative to alter the mother-centered service in postnatal care centers. Last year, the Ministry of Health and Welfare revised parts of the Mother and Child Health Law, requiring state-run postnatal care centers to start serving rooms where mothers and babies can stay together, starting from June 2016.

“Once mothers reach a consensus on the necessity of rooms that can be shared with newborn infants, the ministry will be able to enforce private postnatal care centers to operate such rooms for 24 hours,” said Woo.

The mothers, however, seemed not to have reached such a consensus yet, as their responses to the ministry’s new plan vary widely.

“This is why I chose a postnatal care center where I can stay with my baby. I want to spend as much time with my child as possible,” said Hong, who gave birth just two weeks ago.

“The reason postnatal care centers offer the service of separating mothers and infants is because the mothers demand it,” said Kim Jung-wook, chairman of the Korea Postpartum Association. “When only considering the possibility of mass infection at the center, then I agree with having rooms where mothers can stay together with their infants, but it would be unrealistic to have mothers take care of their children all day long.”