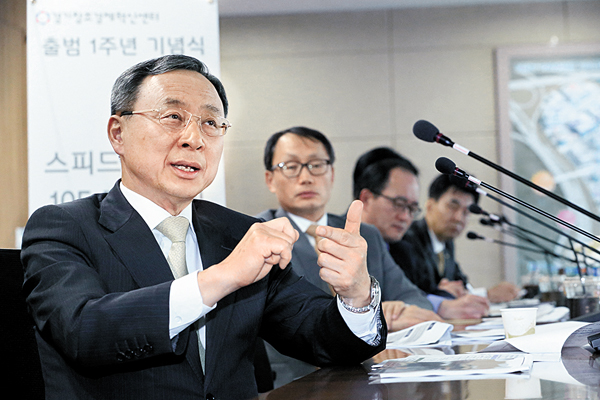 KT has fostered 50 start-ups at the Gyeonggi Center for Creative Economy and Innovation (CCEI) in Pangyo, Gyeonggi in the past year, the leading mobile service operator said on Tuesday.

Celebrating its first anniversary, the center vowed to remodel KT buildings nationwide and transform them into so-called K-Champ centers, which will give working space to fledgling companies that have been incubated to help them grow further. Three K-Champ centers opened on Tuesday in Umyeon-dong and Seocho-dong in southern Seoul and Bundang in Gyeonggi.

Each center has a video conference system named K-Box so companies could collaborate and receive technical assistance without having to physically move to meet people.

The three centers will give space to around 40 start-ups and 10 of them have already moved in. More such centers will open in the second half of the year, aiming to help out some 120 budding companies.

“The main purpose of KT fostering start-ups through the Gyeonggi CCEI is to find new future businesses through companies that could succeed globally,” said Hwang Chang-gyu, chairman of KT.

On the same day, the Gyeonggi center signed a memorandum of understanding with Senegal’s Ministry of Posts and Telecommunications to export its creative economy model and pass down the method of running start-up incubating facilities to Senegal’s Techno Park.