Jeju has the most electric vehicles

Jeju has the most electric vehicles 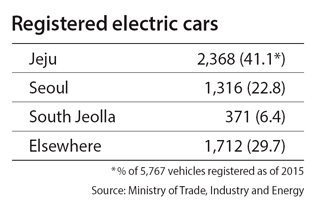 Jeju has the largest number of electric vehicles in the country while South Jeolla is the biggest energy consumer, largely due to the numerous industrial complexes in the region.

According to report about Korea’s energy industry by the Ministry of Trade, Industry and Energy on Wednesday, there were 5,767 electric cars registered in Korea as of 2015. Among the total, 41 percent or 2,368 vehicles were registered to Jeju.

Seoul was in second place with 1,316 while South Jeolla came in third with 371.

Meanwhile, there were 91 locations where energy storage systems (ESS) were in use. The sites output a total of 170.4 megawatts per hour, an increase of 109.3 from the year before.

The next-generation clean energy systems were mostly concentrated in Gyeonggi, which accounted for 20.8 percent, while South Jeolla came in second with 14.1 percent.

“The government is focusing heavily on expanding the new energy industry and we are already seeing some of the progress,” said deputy trade minister Woo Tae-hee at a briefing held at the Sejong Government Complex on Wednesday.

“More than 10,000 households are currently using solar power panels and we are aiming to make that reach 20,000 by this year,” Woo said.

The ministry said new industrial complexes are moving into South Chungcheong, which is contributing to the rapid growth.

Incheon and Ulsan were the two top regions in the country that consumed the most energy for non-industrial use. Residents used 1.5 times more energy than the average Korean.

“Total energy consumption is declining and we will try to lower it by making local governments compete with each other,” Woo said. “Additionally, we are revising some of the plans to ease regulations in order to help energy-related businesses, and we will announce it by June.”

This is the first time the ministry has released an energy report. The ministry intends to issue a report annually from now on to get local governments and related companies more interested in the topic.