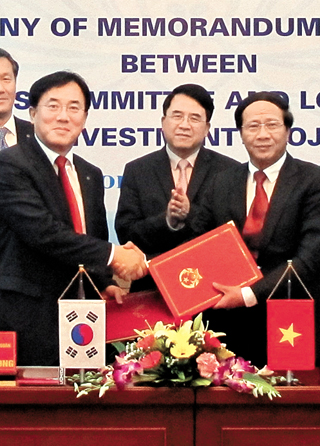 LG Display is spending $100 million to build a module assembly factory in Haiphong, Vietnam, and will begin mass production there in the latter half of 2017 to ramp up its production capacity, the company said Wednesday.

The display supplier for Samsung Electronics and Apple operates two such domestic factories, in Paju and Gumi in Gyeonggi, as well as four outside of Korea. Three are in China - Guangzhou, Nanjing and Yentai - and one in Wrocław, Poland.

Haiphong, located in northern Vietnam, is the country’s third-largest city after Hannoi and Ho Chi Min. The city also has a number of industrial parks that have received investment from many multinational companies.

LG Display said it chose the location as it is close to China, has a large population and offers relatively cheap labor costs.

The growing production demand is mostly for organic light-emitting diode (OLED) panels for TVs made by sister company LG Electronics. The electronics arm of LG Group already controls 80 percent of the global OLED TV market and analysts predict demand for the high-end TVs will grow further this year, when the Rio Olympic Games and the UEFA European Championship are held.

Hyundai Securities said in a March 10 report that LG’s OLED TV production volume this year will triple compared to 2015, hitting to 940,000 units.