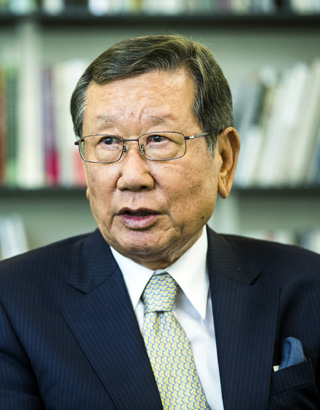 Yoo Heung-soo, the Korean ambassador to Japan, tendered his resignation to President Park Geun-hye last month, a Ministry of Foreign Affairs official said on Wednesday. Yoo hopes to step down from the top envoy post in Japan after the conclusion of an agreement with Japan on the wartime sexual slavery issue in December. The official added, “Ambassador Yoo will continue his duties until a new ambassador to succeed him is named.”

Yoo, 78, was tapped by Park as top envoy to Tokyo in July 2014. The appointment of the former lawmaker came during a period of increased diplomatic tensions, especially over the issue of the Japanese military’s forceful recruitment of young women and girls into sexual slavery during World War II. Over the past two years, Yoo is seen as having actively worked to bridging the diplomatic gap between the two countries.

The Korean and Japanese foreign ministries’ agreement last December, which includes an apology from the Japanese government and a pledge to set up a 1 billion yen ($8.8 million) fund backed by the state budget for former wartime sex slaves, euphemistically referred to as comfort women. According to officials, after the deal was sealed, Yoo said, “I have done what I was supposed to do.”

“The minister-level ambassadors to the four major countries [the United States, China, Russia and Japan] are the pillars of foreign policy,” a Korean official said. “This isn’t just the switching up of embassy heads, it’s forming a lineup of those who will shape the fate of Park’s administration.”

Career diplomat Park Joon-woo, chairman of the Seoul-based think tank Sejong Institute and former senior secretary of political affairs to Park, is being named as a top candidate to replace Yoo. A Japan expert, he also served as former Korean ambassador to Singapore and the European Union.

Korean ambassadors generally spend around three years at a post, and some top diplomats’ terms are drawing to an end. Ambassador to the United States Ahn Ho-young’s terms will hit the three-year mark this June. Ahn has been occupied with the preparation of Park’s recent visit to Washington for the Nuclear Security Summit, but it is expected this post will be reshuffled in the coming months. Ju Chul-ki, former senior presidential secretary for foreign affairs, is being named as a candidate for ambassador to Washington.

Likewise, Oh Joon, ambassador to the United Nations, took the position in September 2013 and has become a sensation on social media through clips of his speeches in the UN General Assembly. His one-year term as president of the UN Economic and Social Council ends in July.

Similarly, the terms of the heads of other key Foreign Ministry-affiliated agencies, like the Korea International Cooperation Agency (Koica), Korea Foundation and the Overseas Koreans Foundation, who are presidentially appointed, are also hitting the three-year mark in May or June.