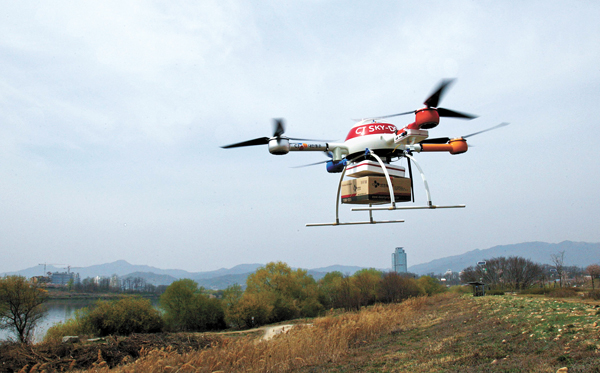 CJ Korea Express demonstrates a drone equipped with technologies that can deploy a parachute in the event of a malfunction, as well as lower parcels for delivery. [CJ KOREA EXPRESS]

CJ Korea Express developed new drone-related technologies, including one that automatically launches a parachute in the event of a malfunction, the company said on Thursday.

The company explained that there were a number of technical barriers involved in developing the real-time monitoring sensor necessary for the technology, as it has to take into account the altitude, incline and acceleration.

The automatic parachute-launching technology linked to sensor is powered by a battery separate from the drone, meaning that it works even if the drone malfunctions. The sensor automatically sends the crash position the moment the parachute is released, and the parachute is recyclable.

“Even if a drone falls down, the parachute reduces the descending speed by over 90 percent, thus minimizing damage,” said a CJ Korea Express spokesman.

Another innovative technology enables the drone to lower a parcel for delivery while still airborne at up to five meters.

The technology is expected to facilitate the delivery of goods under various challenging situations in the skies and reduce the company’s dependence on delivery trucks on the ground and a large human workforce.

“We are expediting drone research with its commercialization in the global market with a long-term perspective in mind,” said Chung Tae-young, head CJ Korea Express’ comprehensive logistics research center.

CJ recently set the goal of becoming one of the top-five global logistics companies by 2020.

The company, which controls 40 percent of the domestic parcel delivery market, did not specify when it might use drones in action.

Currently, using drones for commercial purposes is illegal in Korea.

Logistics players in other countries are racing to revolutionize the way deliveries are made with drones.

Amazon has been testing out its new airborne delivery bots in Canada, the United Kingdom and the Netherlands. NASA is also developing a drone air traffic control system to help keep deliveries of the future moving smoothly and Rakuten, the Japanese e-commerce giant, last month unveiled a snack- and ball-delivery service for golfers that uses drones.

In the United States, the Federal Aviation Administration has been prohibiting commercial use of drones, but said Wednesday it will work to loosen regulations to permit small commercial drones to fly over people and crowds.