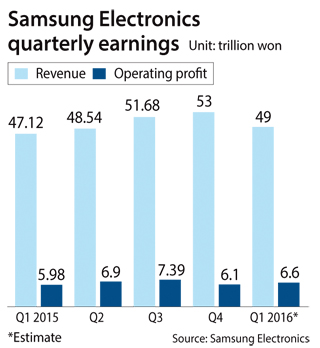 Samsung Electronics delivered an earnings surprise of the positive sort in the first quarter on the back of robust sales of its latest Galaxy S7 flagship smartphones.

In its earnings guidance Thursday, the tech giant predicted operating profit of 6.6 trillion won ($5.7 billion) in the first three months, beating an analyst estimate of 5.6 trillion won compiled by FN Guide a day earlier. The quarterly result marks a year-on-year increase of 10.4 percent.

Revenue for the same period picked up 4 percent to 49 trillion won.

The company releases earnings guidances three weeks before actual results. The consolidated sales revenue and operating profit figures in the guidance are based on a median of estimates. Data broken down by divisions is not available yet.

But analysts estimate that operating profit for the Internet and Mobile Communications (IM) division, which includes smartphones, in the January-March period will be over 3.5 trillion won, the first time it will exceed 3 trillion won since the second quarter of 2014, when it was 4.42 trillion won.

The semiconductor division had a first-quarter operating profit of around 2.5 trillion won, analysts estimate, down from 3.39 trillion won a year earlier. That means the IM division beat the chip division to recover its status as top contributor to operating profit at the world’s No. 1 smartphone and TV producer after 21 months.

The biggest surprise was much better-than-expected sales of the Galaxy S7 and S7 Edge smartphones, which went on sale globally in March. The two smartphone siblings have sold over 10 million units globally, data shows, well above expectations. In the United States and Europe in particular, the S7 series sold far more than its predecessor the S6, according to Samsung insiders.

Some analysts expect the S7’s annual sales to exceed 45 million, compared to below 40 million for the S6 and S6 Edge models.

The S7 smartphones are water resistant and equipped with a micro SD card slot - features that were included on the S5 but were removed from the S6. The S7 line boasts improved battery capacity. Its sleek exterior has been well-received by design-conscious Europeans, according to a Samsung spokesman.

The company strategy to unleash the seasonal flagship phone a month earlier than previous years and to lower the price tag by as much as 8 percent turned out to be effective. The popularity of mid- and low-priced phones under the Galaxy brand added to the margins too.

But some experts say it would be too early to conclude that improved first-quarter earnings results signals Samsung’s fundamental recovery in the smartphone business.

“Apple’s new smartphones are scheduled for release in the second half, which will inevitably undermine Samsung’s profits,” said Park Gang-ho, an analyst at Daishin Securities.

“Samsung needs to introduce entirely new strategies to beef up its market share or margins in the longer term.”

A weaker Korean won versus the U.S. dollar in the first two months of the year also served as a positive factor for Samsung, which relies heavily on exports and overseas sales. The won dropped to as low as 1,241 a dollar by mid-February, while it closed at 1,151.4 Thursday.