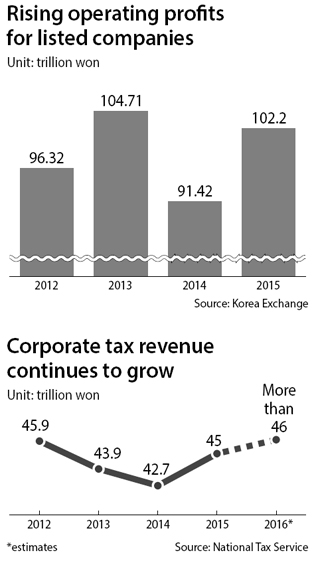 The government’s corporate tax revenue is expected to hit an all-time high this year, exceeding the target amount of 46 trillion won ($39.8 billion).

In Korea, more than 90 percent of companies file returns for the previous calendar year in March. The government gets a clear picture of the year’s corporate tax revenue in March.

Corporate tax revenue decreased for two years in a row from 2013 to 2014, but rebounded last year to 45 trillion won.

“Revenue will grow this year compared to the previous year, the data compiled by March showed,” said Seo Dae-won, a director general at the NTS. “However, some of the large companies and financial institutions have until this month to file their returns, so we have to wait a little while to have a full understanding of this year’s revenue.”

Companies’ profitability has improved even though the overall economy is not doing that well.

According to the Korea Exchange, total sales of 516 companies listed on the benchmark Kospi that are required to file returns in March fell 3 percent year-on-year to 1,639.3 trillion won as of December. However, their operating profit rose 14.2 percent to 102.2 trillion won in the period.

“Declines in oil prices might have helped companies reduce some of their operating expenses,” Seo said.

Another reason for rising tax revenue to increase is that the government cut some tax benefits for companies. The government reduced tax deductions for large companies that are investing in research and development or energy efficient facilities. The Ministry of Strategy and Finance estimated this would increase revenues by more than 240 billion won.

The NTS also warned some 110,000 companies prior to the deadline for tax returns not misuse corporate credit cards for tax evasion purposes.

If companies do not spend more than 80 percent of their net profits in investments, dividends or to raise wages for employees, they will have to pay more tax.

Companies paid hefty dividends to shareholders in order to avoid the additional tax.

Companies listed on the local market paid a total of 18.4 trillion won in dividends last year, up 3.9 trillion won from the previous year.

“Corporate tax filing will end in April, and we will know then how much extra money we collected from the new law,” said Yoon Young-seok, a director at the NTS.

Opposition parties including the Minjoo Party and the Justice Party pledged that they will raise the maximum corporate tax rate from 22 percent to 25 percent if they do well in the upcoming election.

Local companies aren’t pleased about any of this. “The government’s decision to reduce tax benefits is already hurting local companies,” said Song Won-keun, a director at the Federation of Korean Industries.

“It is better to focus on collecting tax than increasing the rate,” said Park Hyung-soo, president of Korea Institute of Public Finance.