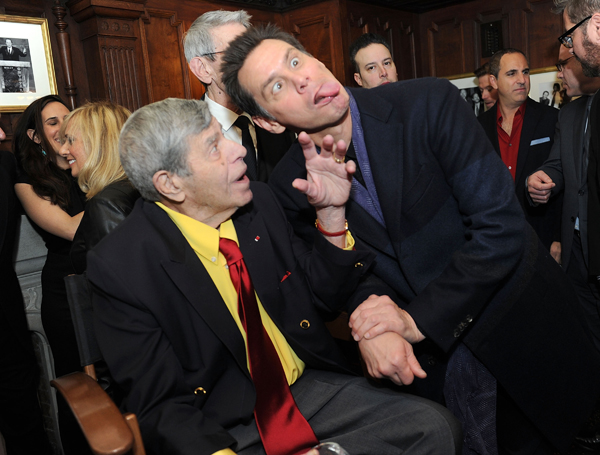 At the Friars Club tribute for Jerry Lewis’ 90th birthday, many of the jokes were not about Jerry Lewis.

There were R-rated wisecracks Friday night about Donald Trump, Monica Lewinsky, doctors, sex and growing old from speakers including Richard Belzer, Freddie Roman and Max Alexander. When the subject did turn to Lewis, the kidding around turned to praise as Lewis was honored as a comic master, inspiration, and, for Belzer, a savior.

“My mother was very physical; she used to be beat me up or give me an enema for punishment,” said Belzer, one of Lewis’ closest friends. “Once in a while I would do a Jerry shtick ... and my mother would laugh and sometimes not hit me.”

About 200 people squeezed into the first floor dining room for the 90-minute event. Lewis, whose birthday was last month, sat to the side of the dais, where he laughed and cried.

The tribute touched upon many of the highlights of Lewis’ long and singular career, from his partnership with Dean Martin to such movies as “The Nutty Professor” and his stage performance in “Damn Yankees.” A compilation of pre-taped greetings included Steven Spielberg, Al Pacino and Don Rickles, who urged Lewis “to go to bed early.”