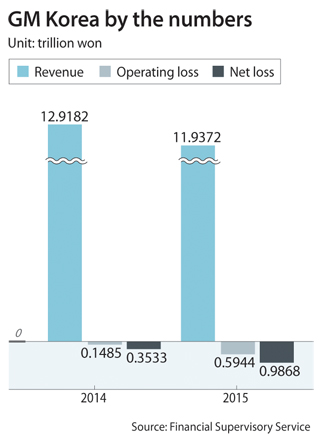 GM Korea has reported its biggest losses ever for last year.

“It is true, we had our worst performance since our establishment [in 2002],” said a spokesman of GM Korea. “The Chevrolet brand’s withdrawal from the Russian market, increasing labor costs and struggles in key export markets were the main reasons.”
GM Korea sold a total of 622,000 cars last year.

The company recently said business will improve thanks to increasing sales of its minicar, the Next Spark, but a series of gloomy announcements are raising concerns that the overall competitiveness of the automaker might get worse.

Last week, the company said its headquarters in the United States decided not to produce Chevrolet’s flagship Impala sedan in Korea considering the current market conditions. The Korean office had previously said it would be possible to produce the popular sedan at the Bupyeong plant in Incheon where the overall car production has been decreasing lately.

The company decided to stop producing the Alpheon sedan that was manufactured in Bupyeong in August after seeing poor sales records in the domestic market.

The automaker’s labor union strongly protested the decision as they worried about losing jobs, but the company told them it could persuade U.S. headquarters to manufacture the Impala instead if annual Impala sales hit 10,000 units.

At first, it looked like the plan was going to work out.

In March, accumulated sales of the Impala surpassed 10,000 units in only six months since it came to the Korean market. The labor union pressed the GM Korea management to keep their promise, but the company announced last week that it will continue importing Impalas from the United States.

“We will demand management produce a mid to large size sedan in Bupyeong in the upcoming wage negotiation,” said a spokesman of GM Korea’s union. “If they don’t comply with our demands, we might consider launching a strike. We have been waiting for the company to make a reasonable decision and it looks like the time for talking has ended. We will act from now on until the company decides what to produce in Bupyeong.”

“We will try to improve our overall profit structures and financial solvency,” said a spokesman of GM Korea.