Naked truth of the alliance

Naked truth of the alliance 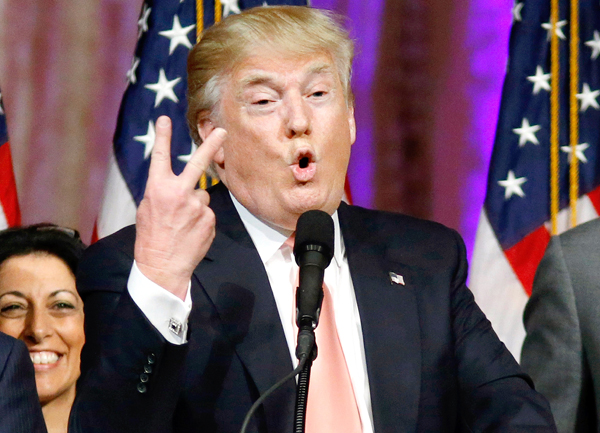 “The Anglo-Portuguese Alliance survived 600 years, and the U.K.-U.S. alliance continued for more than 100 years,” Yoichi Funabashi, former editor-in-chief of the Asahi Shimbun, told me a few years ago. “I believe the U.S.-Japan alliance should survive a century,”
Japan is not the only one that wants the alliance to continue. In Korea, many cherish the importance of its alliance with the United States. Pundits tend to say things like “Without the U.S., Korea has no past, present or future,” “The Korea-U.S. alliance is like oxygen” and “The alliance will continue for 100 years.” These remarks are something we hear frequently. It means expectations are high for the alliance with the United States.

But signs of abnormality came from a surprising place: Donald Trump, the frontrunner (so far) of the Republican primary in the U.S. presidential race. He says Korea is a very rich and great industrial nation, but the United States was not rewarded fairly for its contribution to the country. He has also said that the United States is sending warships and airplanes endlessly and conducting many military exercises, but only a fraction of the entire expense is reimbursed.

Trump complained that Korea’s nearly 1 trillion won ($870 million) annual contribution for the U.S. Forces Korea’s cost is too little, and that Washington must withdraw troops if Seoul continues to want the free meal. The most worrisome comment came from his view on a possible conflict against a nuclear-armed North Korea in Northeast Asia. “It would be a terrible thing, but if they do, they do,” he said. He went on to say, “Good luck. Enjoy yourself, folks.”

For Koreans, who have cherished the U.S. alliance for decades, it is shocking, but from my perspective, it was not a slip of the tongue. Trump was accurately reflecting deeply-rooted isolationism in American society. It was the voters’ sentiment that the United States must stop playing the role of the world’s police and devote all its attention to domestic issues.

Of course, the main players in Washington do not treat Trump’s remarks seriously. They think he has very little chance of winning, and even if he does, a pragmatic businessman won’t be able to push forward a reckless policy of isolationism. Even if he does, Washington insiders believe he will face strong resistance from the public, Congress and mainstream Americans.

Is that just wishful thinking? By treating Trump as a political clown riding the wave of populism and ignoring his foreign policy pledges as just campaign rhetoric, the pundits feel comfortable. But his words carry the candid sentiments of ordinary Americans. As New York Times columnist Roger Cohen pointed out, worsened inequality, failed welfare policies, growing practices of plutocracy, skyrocketing youth unemployment, the increasing relocation of jobs to overseas, snowballing hostility against immigrants and polarization in society have created rich soil for Trump’s foreign policy views to grow.

Instead of the “United States in the world,” the voters want “America first,” and that sentiment goes beyond the conservatives. Young, working-class, and even the middle-class voters who support Bernie Sanders contend it is hard for them to make ends meet. Why send troops to other countries and spend astronomical amounts of money on defense budgets, they wonder.

In order to increase spending on education, health and welfare as Sanders has promised, the defense budget must take a radical cut. It is natural that the U.S. commitment to security for its allies, including Korea, will become weak. The leftists also want to promote isolationism.
Taking into account the supporters of the two candidates and looking at the entire political landscape of the United States from that point of view, the optimism of Washington’s major players seems rather empty. How many U.S. citizens are actually affectionate about Korea? I don’t see a large group.

Although the situation is complicated, the Korean government appears to be carefree. “Regardless of the outcome of the U.S. presidential election, the Korea-U.S. alliance will remain strong and continue to advance,” a Korean Foreign Ministry official said. “Bipartisan support in the United States for the six-decade-old alliance and better bilateral ties is stronger than ever.”

It may sound convincing, but the truth gets clear if we think back to what had happened in the 1970s. An alliance is not eternal, and the rupture can come with any change in domestic U.S. politics.

We are left with three lessons. First, we must not put all our eggs in one basket. Second, we must remember the Latin saying “Praemonitus praemunitus” — “Forewarned is forearmed” — the very lesson handed down for centuries from Yulgok Yi I of the Joseon Dynasty to the late President Park Chung Hee. Third, we need a more creative and flexible foreign affairs and security vision. Policy surrounding the North Korean nuclear issue is a starting point. We need to have a critical review and inclusive consideration of inter-Korean relations, Korea-China relations, Korea-Russia relations and the security order of the entire Northeast Asia.


*The author is a professor of political science at Yonsei University.