‘The Boss’ edges out the superheroes for top spot

‘The Boss’ edges out the superheroes for top spot

Step aside, Batman and Superman. Melissa McCarthy is “The Boss” at the box office now.

The actress’ latest comedy narrowly topped “Batman v Superman: Dawn of Justice” at the weekend box office with a $23.5 million debut, according to comScore estimates Sunday. “The Boss” stars McCarthy as an over-the-top business mogul attempting to rebound after being convicted of insider trading.

McCarthy’s win wasn’t a total knockout. The Warner Bros. superhero smackdown starring Ben Affleck as the Dark Knight and Henry Cavill as the Man of Steel nabbed $23.4 million in its third weekend. Despite poor reviews and word of mouth, “Batman v Superman” has earned an estimated $296.7 million to date. 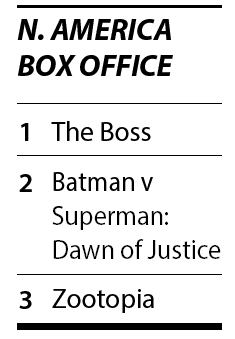 “It’s incredibly close,” said Paul Dergarabedian, comScore’s senior media analyst. “It’s one of the closest results between first- and second-place films I’ve ever seen. Anything can happen. We’ll know for sure tomorrow.”

Disney’s “Zootopia” landed in third place with $14.4 million. In its sixth weekend, the animated film has earned a total domestic haul of $296 million.

The weekend’s only other newcomer, STX Entertainment’s first-person action romp “Hardcore Henry,” opened in fifth place with a dismal $5.1 million.