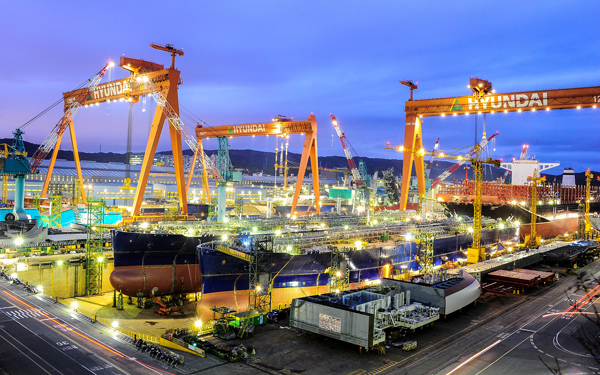 Hyundai Heavy Industries’ plant in Ulsan, South Gyeongsang, is up and running even at night to address slowing sales and the reduced number of orders. [HYUNDAI HEAVY INDUSTRIES]

There was initially hope that Iran might offer new business opportunities after the lifting of economic sanctions earlier this year, but most Iranian companies are not financially capable of operating big projects, mainly due to a lack of capital caused by a decade of sanctions.

“Most Iranian companies don’t even have money for the initial down payment needed to sign a deal,” a spokesman for a local shipbuilder said. “I heard that even state-run companies like Islamic Republic of Iran Shipping Lines [IRISL] have demanded a large sum of financial support, sometimes up to 95 percent of a ship’s price, during recent negotiations with Korean companies.”

Since Korea is a member of the OECD, a company ordering a ship must pay 20 percent of the total cost, according to OECD regulations. While Korean companies are dealing with these demands, Chinese shipbuilders, who enjoy the support of state-run banking institutions, are attempting to win Iranian business with eye-popping financial benefits.

“The demand is obviously increasing lately, following the lifting of economic sanctions in Iran,” said Hong Jung-hwa, a researcher at the Korea International Trade Association. “Korean companies, however, need to be careful when making deals since Iran’s financial market is still immature. Such conditions might make local shipbuilders hesitant in carrying out big projects, since Korean companies have been suffering from financial problems for a long time as well.”

The total operating losses reported by the nation’s top three shipbuilders was 8.5 trillion won ($7.4 billion) last year. But companies like HHI aren’t giving up. HHI is currently negotiating with IRISL on making three 14,500 TEU (20-foot equivalent unit) container ships worth $350 million. The company expects to finalize the deal in the second quarter.

Regardless of such efforts, Korean shipbuilders are predicted to face large-scale restructuring, as overall market conditions are not expected to improve much this year and the government has already shown it is willing to force restructuring after Wednesday’s general election.

“The government needs to provide a special law that can give financial support to companies like the HHI,” Kim Moo-sung, former leader of the Saenuri Party, recently said, “and needs to stabilize labor issues in regions related to the industry.”

Big companies like DSME are currently being restructured. After its major creditor, Korea Development Bank (KDB), decided to give 4.2 trillion won as part of normalization work earlier this year, the company provided a plan to reduce its operation cost by 1.85 trillion won by reducing its workforce and selling unnecessary properties. The company has only been cutting executive-level employees, but industry insiders say the reduction might soon be extended.

Small and midsize shipbuilders are also expected to face large-scale restructuring. Hanjin Heavy Industries is currently under a financial audit and is expected to sign an agreement that will allow its creditors to jointly manage the company.

The creditors, including the state-run KDB, recently gave 130 billion won of funds to Hanjin, as it needed money to purchase equipment, and the shipbuilder had recently sold its assets, including an office building in Manila, in order to provide the needed cash. The company is expected to announce its normalization plan after the audit ends, but it is already receiving voluntary resignations from administrative workers.

More mergers and acquisitions are expected in the second half of the year as well. SPP Shipbuilding was recently acquired by SM Group, which said it will take over SPP’s shipyard in Sacheon, South Gyeongsang, for about 400 billion won.