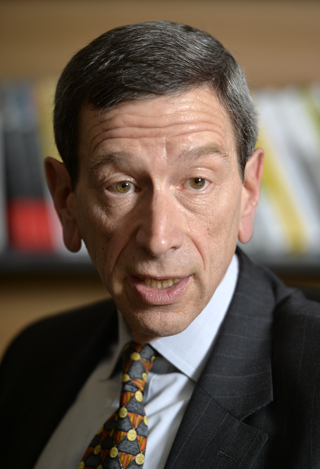 Robert Einhorn, the former U.S. Department of State special adviser for nonproliferation and arms control, warned that if South Korea chooses to develop nuclear weapons, it would lead to its isolation.

Einhorn, a Washington-based senior fellow in the Brookings Institute’s Arms Control and Non-Proliferation Initiative, sat for an exclusive interview with the JoongAng Ilbo and Korea JoongAng Daily on Wednesday at the newspaper’s headquarters in central Seoul.

“It will result in much greater South Korean isolation from the international community,” he said. “It could disrupt or even terminate the U.S.-Republic of Korea alliance, and that’s an alliance that very much serves the national security of both South Korea and the United States.”

He warned of the “serious costs” of Seoul choosing to become a nuclear state to deter threats from North Korea. “It would mean that South Korea’s reliance on nuclear energy to generate about a third of its electricity will no longer be possible because all sources of South Korean imports, of uranium and enriched uranium, those will be ended.”

In light of North Korea’s recent nuclear and missile provocations, fresh debate has arisen in South Korea on how best to deter a possible attack by Pyongyang and the efficacy of Washington’s nuclear umbrella in protecting the region.

Einhorn cautioned against taking too seriously remarks made by Republican presidential frontrunner Donald Trump, who has called for Japan and South Korea to be nuclear-armed and for troops to be withdrawn from the Korean Peninsula.

“I don’t believe what he says about Japan and South Korea has strong support within the American public,” Einhorn said.

On Washington’s policy toward North Korea, he said the Barack Obama administration has relaxed its conditions to start negotiations with Pyongyang before.

The “problem is the unwillingness of North Korea to engage,” he said. “The North Koreans have to realize that their interests are better served by negotiating seriously and accepting meaningful limitations on their nuclear and missile programs.”

Einhorn served as the top U.S. negotiator in nuclear energy talks with Seoul from 2010 to 2013, as special advisor for nonproliferation in the Barack Obama administration.

The following are excerpts of the interview:

Q. After Pyongyang’s fourth nuclear test in February, there has been some discussion in South Korea on the possibly of possessing nuclear weapons. What do you think of that idea?

A. In a context where there is a growing North Korean military threat, it is understandable that the South Korean public will be concerned, frustrated that this North Korean issue has not been resolved. So it’s not surprising that some would believe that a solution to the problem is for South Korea to acquire its own nuclear deterrent. But it’s also very important that the South Korean public understand the implications of that. And the implications I think could be very seriously negative…

My belief is if South Korea had an informed debate about these actions, it will conclude that it is not in South Korea’s national interest to pursue nuclear weapons. Fortunately, South Korea has a very effective way of ensuring its own security, and that is to continue the robust U.S.-ROK military alliance that has served the security interests of both South Korea and the United States for generations. By all accounts, this alliance has never been stronger. And I think this alliance really provides what South Korea needs to withstand any threats from the North.

There is worry about whether the U.S. nuclear umbrella will work properly to protect South Korea.

I think the U.S. nuclear umbrella is effective today and will remain effective in the future. I think there is strong support in the United States for retaining this alliance which serves American interests as well South Korean interest. I think the best guarantee of the reliability of the U.S. nuclear umbrella is the stationing of over 28,000 American military personnel on the peninsula. What that means is that if there were ever a military conflict on the peninsula, the United States will be immediately engaged; our vital interest will be immediately engaged.

If nuclear armaments are not possible, there is also talk of maintaining the capability to develop nuclear weapons at any time if needed, like Japan. Does Washington see this as an acceptable option?

Republican front-runner Donald Trump has great popularity in the U.S. presidential campaign. It seems to us that it’s a reflection of the American people’s discomfort and dissatisfaction about the current security system, so ordinary South Koreans are worried about the U.S.-South Korea alliance.

I don’t think there is any need for South Korean people to feel uncertain about the U.S.-ROK alliance. You mentioned Donald Trump. It’s clear that he has strong support among a segment of the American population. I think it’s a minority share, but he has strong support. But that support is unrelated to the remarks he made about the alliances with South Korea and Japan. His supporters support him because of a dissatisfaction, mostly on economic grounds…

I think there is broad support in the United States for these alliances; there is no interest in bringing the troops home. There is a recognition that it will cost more to the American taxpayer to station these same troops in the United States than to station them here in Korea. So there is no advantage to the taxpayer in bringing them home. Their deployment here serves broad U.S. interests as well as South Korean interests.

Do you think it is likely that North Korea will launch long-range missile in the near future or a fifth nuclear test?

It’s very possible Kim Jong-un will decide on another provocation. He wants to consolidate his power at the upcoming North Korean Workers’ Party congress in May. I think he has some incentive to appear like a tough guy because that will help him achieve broader support at the party congress. On the other hand, he has to think of some of the risks in engaging in further provocations now. At this time, the Chinese are giving serious thought to how they’re going to implement the new UN Security Council Resolution 2270. The Chinese can decide to ratchet up, to tighten sanctions or they can decide to ease them up; this is a crucial juncture.

And if Kim Jong-un should decide on another provocation, another long-range missile test, a fifth nuclear test, the timing may be very unfortunate from their interests because another provocation could persuade the Chinese to tighten up those sanctions. So he has decided this trade off: look tough for the party congress or avoid stimulating the Chinese to tighten sanctions regime… If he were entirely rational he would decide to hold off on any provocations because a provocation right now could result in China tightening the screws.

North Korea is different from Iran in many ways since Iran is heavily dependent on the external economy. Do you think the sanctions will work and is a reasonable and efficient policy to stop North Korea?

I’ve always felt that it would be easier to sanction Iran than North Korea for a number of reasons. Iran’s economy must be integrated in the international system. If you can cut off Iran from the international financial system… And we were able to do that, to cut Iran off from the international financial system, to reduce dramatically their sales of crude oil, and that put pressure on Iran and brought them to the negotiation table. North Korea is different. It’s not fully integrated in the world economic system… And there’s a huge difference. Iran had no big benefactor, no country that was committed to making sure that it was not under intense pressure. North Korea is different it has a big benefactor: its name is China. North Korea’s needs are small. China can meet those needs. Its needs for fuel oil, its needs for food. Also China can be a customer for North Korea’s principal products whether it is coal or iron or other minerals.

Is Washington prepared to abandon a policy of strategic patience in regard to Pyongyang?

I think there is a misimpression of the Obama administration’s approach. Many people characterize the approach as strategic patience, as an unwillingness to engage with North Korea. I don’t think that’s accurate…

Early in the administration, [the late] Ambassador Stephen Bosworth [the former U.S. special representative for North Korea policy from 2009 to 2011] went to Pyongyang to explore the possibilities of making progress… Then later on, his successor Glyn Davies negotiated the so-called Leap Day deal which fell apart within a month or so after the North Koreans launched a satellite. And even since then, there have been a number of efforts by the Obama administration to reach out to the North... So I think the administration has shown flexibility.