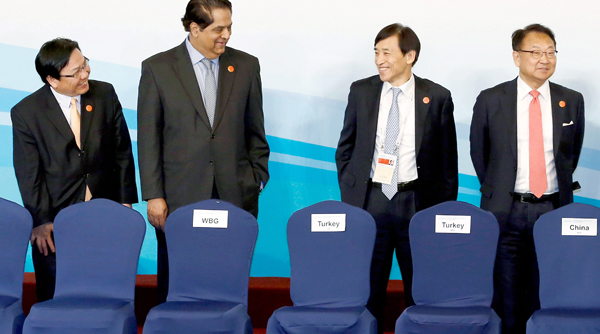 The communiqué issued by the Group of 20 finance ministers and central bankers at the conclusion of talks in Washington this weekend had a somewhat unreal, and worryingly ironic, tone.

Yet the communiqué, which was issued in the names of the specialized policy makers most closely involved in perpetuating this highly unbalanced policy mix, contained few new policy initiatives. As a result, the outlook is for more of the same, which means disappointing growth and financial risks that could affect the well-being of billions of people around the world.

The G-20 meeting was held as the International Monetary Fund (IMF) released yet another downward revision of its outlook for global growth. Making the updated assessment even more sobering was the institution’s warning about the unusual range of risks, including the possible disorderly exit of the United Kingdom from the European Union, along with other political risks to financial volatility as well as the particular challenges facing commodity exporters experiencing huge hits to their earnings.

The IMF’s correct appraisal was accompanied by the reiteration both of the measures that it says are needed (a more comprehensive policy approach) and those that must be avoided (particularly, beggar-thy-neighbor currency devaluations). There also was broadening awareness that the longer the current configuration persists, the more it will erode the potential for future growth and prosperity.

Nonetheless, no notable attempt was made to agree on how to translate wise words into durable and effective actions (such as a global infrastructure initiative combining both national measures with multilateral ones, all financed by the unusually low interest rates prevailing in the advanced economies).

This is particularly unfortunate given the consensus that has developed around the IMF’s call for a better mix of monetary, fiscal and structural reform measures — to which I would add the need to address pockets of excessive indebtedness and enhance global policy coordination, including through a further strengthening of the credibility and operational flexibility of the IMF itself.

The sad irony is that despite the unusually high degree of consensus on the outlook for the global economy and the policy implications, the G-20 again fell short of committing to a collective and verifiable set of actions that could spur measures at the national level. This is particularly disappointing for two reasons:

First, the G-20 has shown its ability — though too infrequently, alas — to act; and when it has, the results were potent. Indeed, if it weren’t for the coordinated policy approach adopted by the G-20 at its meeting in London in April 2009, the world could have fallen into a devastating multiyear depression.

Second, with companies sitting on so much cash or devoting it exclusively to financial engineering, the unleashing of global growth does not need a “big bang” in terms of policies. A small bang would probably prove sufficient to unleash faster global recovery, with the private sector doing much of the heavy lifting by using its strong balance sheets to expand current and future output. The resulting upside would be turbocharged by firm- and sector-specific innovations that could deliver economy-wide benefits.

The economic officials from around the world who attended the meetings can take comfort in the greater collective understanding both of the risks facing the global economy and of the better set of policies needed to address those challenges. What they don’t have, however, is enough of a durable win-win action plan to serve as a catalyst for reluctant politicians at home.

Sadly, the required policy response may only come with a further worsening of an already mediocre outlook for growth as well as deteriorating prospects for genuine financial stability.