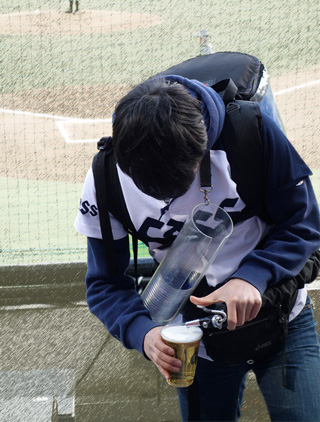 Park Byung-ho hit home runs two days in a row. Fans anticipate he will break Choo Shin-soo’s record of 22 home runs for the most home runs in a season by a Korean player in the MLB. The Minnesota Twins designated April 19 “Park Byung-ho Day.” Where does the term “home run” originate from? Local monthly magazine “Design” featured an interesting article in its April issue. Baseball is not a mere sport anymore, but a part of our life and design.

In the 19th century, when baseball was first played, there was no outfield fence. The balls were not as bouncy and did not fly far. A home run was literally a batter running into home to score. Today, it is called “inside park home run” or “ground home run.” In the United States, it was defined in 1958 that the distance from home plate to the side fence should be at least 98 meters (107 yards) and 122 meters to the center fence. In 1991, Korea designated the side fences to be at least 91 meters from home plate, and the center fence should be at least 105 meters from home.

According to design columnist Kim Shin, there is no exact size for baseball fields, unlike other sports. Many fields are not symmetrical, as the design depends on the shape of the site. It was inevitable as baseball fields were built in expensive downtown sites in the early 20th century. For example, the distance to the left fence at Fenway Park, the home of the Boston Red Sox, is shorter than the distance to the right, so the left fence was raised to 11 meters high.

The restrictions made the ballpark design more colorful. MLB clubs that had produced cookie-cutter parks in the ’60s and ’70s began trying new approaches since the ’90s. The key is to be spectator-friendly. Outfields are designed low so that the sky can be seen from the stands, and the distance between the spectators and players was reduced. The foul zone is reduced so fans could sit closer.

In 2016, Korean baseball parks are evolving. It is the most notable change since the professional baseball league was founded in 1982. The Samsung Lions’ new octagonal ballpark has 80 percent of the seats in the infield. The outfield seats are lowered to provide a better view. The first priority is the customers, and the second is service.

Korea’s professional baseball league was created as a part of the 3S (Sports, Screen, Sex) policy during the Chun Doo Hwan government as a distraction from politics. Now, professional baseball wants to reinvent itself. But some things seemed to go backward, as vendors selling beer around the bleachers were banned. Fortunately, the government has just lifted the ban. In the 19th National Assembly, which ends soon, unnecessary regulations like these need to be removed at once.