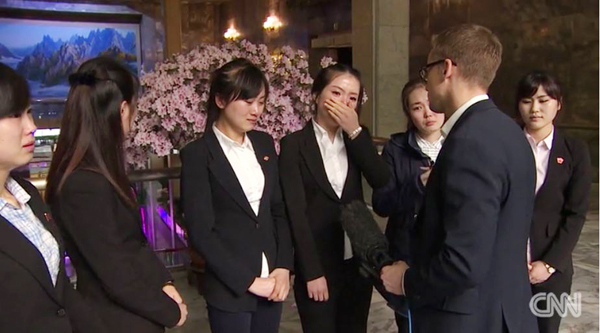 CNN correspondent Will Ripley interviews North Korean women who worked at a state-run restaurant in China on Monday at the Koryo Hotel in Pyongyang. It was the first interview with colleagues of the 13 defectors who worked at the Ryugyong Restaurant and fled to the South earlier this month. [NEWSIS]

Following the defection of 13 North Koreans from a restaurant in China earlier this month, Pyongyang accused the South of “abducting” the defectors and has now produced seven waitresses who claim their former compatriots would never do such a thing and that they were deceived.

Choe Hye-yong, the head waitress, explained in a tearful interview with CNN at Pyongyang’s Koryo Hotel on Monday how she was deceived and almost abducted to Southeast Asia.

“All of this was planned by our bastard manager,” one of them says, trembling with anger.

Choe says she only had time to “warn” a handful of other waitresses.

“The car was already waiting for us,” she said, claiming that the manager and a South Korean businessman coordinated the trip under the direction of government authorities in Seoul.

Another waitress, Han Yun-hui, tearfully said of the recent defectors, “I think about our colleagues being deceived and dragged to South Korea and facing extreme hardship there.”

“We would never leave out parents, our country, our leader Kim Jong-un. None of us would ever do that,” said Han. Most of the seven women were wearing black jackets and patriotic red lapel pins.

Earlier this month, South Korea announced a “mass defection” of one male manager and 12 female employees of the Ryugyong restaurant in Ningbo, Zhejiang Province. Local reports revealed that the group moved to Shanghai by land and flew to a third country in Southeast Asia, where they took a plane bound for South Korea.

The Ministry of Unification has repeatedly said the defectors, mostly middle-class North Koreans, came to the South of their own free will.

A week after the announcement, North Korea released a statement accusing South Korea of “abducting” its citizens in China and urged Seoul to return the 13 employees, arguing that an unprecedented group “abduction” had been committed by “gangsters of the puppet intelligence service,” referring South Korea’s intelligence agency.

The largest group defection in Kim Jong-un’s regime also revealed that Beijing, the only ally of Pyongyang, has changed its position on North Korean defectors, as the defectors were permitted to leave Shanghai for a Southeast Asian country with their legal passports.

The Chinese government confirmed that the defectors escaped the restaurant in China on April 6 and left the country with North Korea passports.

North Korea’s Red Cross Society said it has detailed information about how the South’s intelligence service “lured” the North Korean defectors, as well as information about the country that “connived” with Seoul, a reference to China, which has traditionally repatriated North Koreans trying to leave its territory for other countries.

“If true, a mass defection would be a humiliating blow to Pyongyang leadership,” CNN said in a report. “Especially because it was apparently allowed by China, North Korea’s most powerful ally and trading partner.”