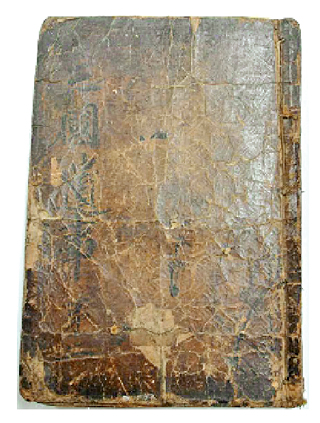 The second chapter of the second book of the Memorabilia of the Three Kingdoms resurfaced after 17 years. [NEWSIS]

Authorities revealed Thursday that they have retrieved a rare treasure and are investigating a man who has allegedly been hiding the national cultural asset, the second chapter of the second book of the Memorabilia of the Three Kingdoms, in his bathroom for 15 years.

The second chapter of the second book of the Memorabilia of the Three Kingdoms has been missing since Jan. 25 of 1999, when two men broke into the house of a professor of Chinese classics and stole a total of 13 cultural assets.

Police investigated the book’s whereabouts for two years, but to no avail. The unresolved case was finally closed and the professor passed away in 2014.

Then, after 17 years, the book resurfaced on an artifact auction on Jan. 20, with a starting bid of 350 million won ($308,247). The professor’s daughter recognized the book and called the police who, working with the Cultural Heritage Administration, apprehended the man, surnamed Kim.

“I did not know that the book was a stolen good,” Kim told police. “I bought it at an antiquity shop in Daejeon in 2000, and I paid 98 million won.”

If Kim’s testimony holds in court, he can claim ownership over the artifact, since he gained it without any criminal intentions and because the statute of limitation had expired.

But to the authorities’ question of whether he had ever registered the book at an exhibit, Kim answered, “I had never taken it out after buying it, not for the past 15 years.”

“When Kim began the process to put on auction the artifact last November, that’s when the artifact was no longer concealed, but the statute of limitation on concealment charges began then,” said a police officer.

“If Kim had bought the book with the proper intentions, he would not have hidden it for the past 15 years,” the officer added.

According to police, Kim moved four times while in possession of the book, and every time he moved into a new house, he called an interior designer to create a 3.3 square-meter (10 square-feet) secret space in the ceiling of the bathroom, where he kept the block-book hidden.

Authorities called for the abolishment or extension of the statutes of limitation on cultural assets, as otherwise thieves can simply wait out until the expiration of legal culpability.

Experts say that the book was probably printed around 1512.

“Further analysis on the book is needed to determine its true value, but experts have so far estimated it to be the earliest among those [of the Memorabilia of the Three Kingdoms] currently existing,” said an official of the Cultural Heritage Administration.