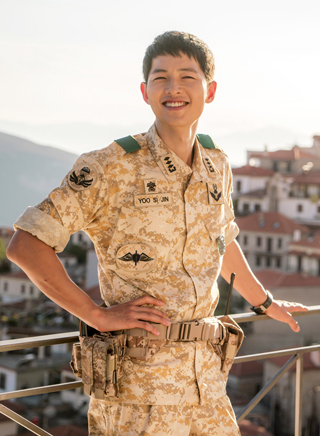 Star actor Song Joong-ki will be heading to China for a series of fan meets, the actor’s agency, Blossom Entertainment, announced on Friday.

Beginning in Beijing on May 14, Song will visit a total of eight landmark cities across China and Taiwan.

The actor will have his second fan meet in Hong Kong, following the one he made in March with his female counterpart in the hit drama “Descendants of the Sun,” Song Hye-kyo. He will wrap up his campaign on June 25 in Taipei.

Song recently held a sold-out fan meet at Kyung Hee University on Sunday, where he greeted 4,000 fans. He will have another fan meet on May 7 in Bangkok before flying to China.

Having played the lead role in the drama “Descendants of the Sun,” Song’s popularity in China has risen exponentially during the show’s record-setting run.

The popularity of the show has also led to the actor being cast in many Chinese entertainment programs, such as “Ben Pao Ba Xiong Di 4,” as well as a number of TV commercials, including one in which he teamed up with Chinese actress Zhang Ziyi.

The star flew to Hong Kong yesterday to participate in the Dior Homme 2016-17 winter fashion show.