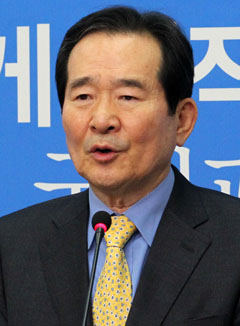 With the emergence of a three-party system for the first time in 20 years, the once-ceremonial position of speaker of the National Assembly will become more important than ever, and high-profile politicians of the Minjoo Party are already making their bids for it.

Rep. Chung Sye-kyun, who scored his sixth-term in last week’s general election by beating the former mayor of Seoul, Saenuri candidate Oh Se-hoon, has thrown his hat in the ring.

“I have served as the party’s chairman three times already,” he told the JoongAng Ilbo. “If I run again for the chairmanship, the people will call me a ‘professional chairman.’ I am considering running for speaker or preparing for a presidential race.”

Other senior Minjoo lawmakers who scored their sixth-terms, Reps. Moon Hee-sang and Lee Seok-hyun, are also going after the speaker post. “All lawmakers want to be a speaker someday,” Moon said. “So do I.”

Reps. Park Byeong-seug and Won Hye-young, who won their fifth terms last week, said that they, too, want to run in the speaker race.

“In the past, the speaker used to be considered an arm of the president, but not anymore,” Lim Chae-jung, former speaker of the National Assembly who served the post from 2006 to 2008, told the JoongAng Ilbo. “In the 20th National Assembly, the independence of the legislature will become more prominent, and the status of the speaker will become stronger.”

“We must prepare our agenda for next year’s presidential election by initiating economic bills in the legislature in the coming months,” a senior Minjoo official said. “The speaker will not be an honorary position. This time, he will play a crucial role in preparing the party for the presidential election.”

Although the speaker’s power is largely curtailed, the speaker can still introduce a bill directly to a voting session without required committee approvals. The speaker also has the right to stop lawmakers’ speeches during a main session. Some senior Saenuri politicians, including Rep. Suh Chung-won, who succeeded in winning his eighth term, are considered potential candidates, but there is a little possibility for a Saenuri winner in a legislature dominated by Saenuri’s rivals.

Even if the Saenuri, who won 122 seats, manage to recruit seven conservative independents, they would still be outnumbered by liberal lawmakers as the Minjoo have won 123 seats, the People’s Party 38 and the Justice Party six.