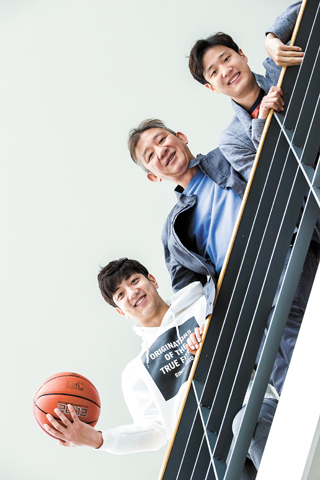 To call the former basketball player Heo Jae merely a star would be an understatement. In fact, it would be more appropriate to dub Heo a Korean basketball legend.

Not only is he a three-time MVP of the Jumbo Series - the-top level championship for teams from colleges and companies before the KBL started in 1997 - Heo also holds the record for the most points scored in one game in the International Basketball Federation (FIBA) World Championship, scoring 54 points in 1990 against Egypt.

Although incomparable when it comes to basketball in Korea, Heo is just an ordinary father to his sons, Wonju Dongbu Promy’s Heo Ung and Yonsei University’s Heo Hoon.

After winning the KBL championship title in 2009 and 2011, the Jeonju KCC Egis led by coach Heo Jae got stuck in a downward spiral, finishing at the bottom of the league in 2013 and 2014. Heo took the responsibility for the team’s decline and stepped down from the post in February 2015. Despite his departure, Heo remained in the limelight due to his sons, whom many expect to live up to their father’s legacy.

Heo Ung is a shooting guard for the Promy, in his second year in the professional league. He played in 54 games last season while averaging 12.07 points and 2.9 assists, a tremendous development from his first season during which he appeared in 41 games to collect 4.8 points and 1.9 assists on average. His progression was enough to earn him the Most Developed Player award after the regular season this year. He also collected the most votes from fans during the All-Star Game.

Heo Jae’s second son, Heo Hoon, is a point guard for Yonsei University, one of the most renowned basketball powerhouses in Korea’s college league. He led his school to top the MBC National College Basketball Tournament for the first time in 11 years. During last year’s Pro-Amateur Basketball Championship, his versatile playing style and prowess on the court enabled him to score 23 points against the Ulsan Mobis Phoebus’ four-time KBL MVP guard Yang Dong-geun. Thanks to his effort, Yonsei University overcame the Phoebus, the defending champions.

The JoongAng Ilbo interviewed the Heo trio to discuss the life of the country’s top basketball family.

Q. Heo Jae, what do you think about your sons growing up to be basketball players?

A. Heo Jae: They began playing ball in 2005 when I went to the United States to get coaching lessons. Ung started when he was a seventh grader and he showed remarkable improvement despite he began playing late. Hoon is showing the potential to compete in the pro league. But, the two still have a long way to go.

Did you object when they first decided to play the sport?

Heo Jae: Ung was a good student. We thought he was going to grow up to be a doctor. But what parents don’t have soft spots for their children?

Heo Ung: Father finally allowed me to play ball. But he made it clear that if I wanted to succeed in the sports world, I have to be the best.

Heo Hoon: I started to play basketball when I was in fifth grade after my brother. Initially, I wanted to be a doctor so I could help my brother when he is injured.

Are there any similarities among the three of you?

Heo Jae: Unlike me who’s left-handed, both of my sons are right-handed. But Ung’s got shooting form similar to mine. Hoon’s bold playing style also resembles mine back in the days.

Heo Hoon: When I do weight training, I get results quicker than others. I think I got that from my dad. My physique is very similar to his.

Have you seen your father play?

Heo Ung: I watched the highlights from 1997-98 season finals series when father played for the Busan Kia Enterprise. Father had a fractured wrist but he led the team to the final round of the series. I knew then why people called him the “basketball president.”

Heo Jae: It was only about 30 percent. When I was on fire, I would drain shots from left and right. But when I had a bad shooting day, I concentrated on running the ball and driving to the basket. I often threw myself during loose ball situations. I hope my sons become as tenacious players as I was.

It must be difficult to be the sons of Heo Jae. How does it feel to follow your father’s footsteps?

Heo Ung: Many people told me I will be successful if I can even become only the half the player my father used to be. I try to follow the role model of my father.

Heo Hoon: I never felt pressure from being my dad’s son. Whenever I heard a negative comment, I just let it go, thinking some people are jealous of me for having such a great dad.

Heo Jae: Although they don’t show it, it must have been difficult for them to be in my shadow. When they became members of the youth national team, it was heartbreaking to hear some people saying my sons got their positions on the team just because they are my sons.

Will the fans be able to see you three on the same team one day?

Heo Hoon: I plan to play this game until well into my 40s. So perhaps when my brother and I are at the end of our pro careers, it might be possible for three of us to be in the same team.

Heo Jae: I would like to go back to the court to coach a team when the opportunity presents itself. I also hope my sons become the best they can be and eventually be recognized by others.