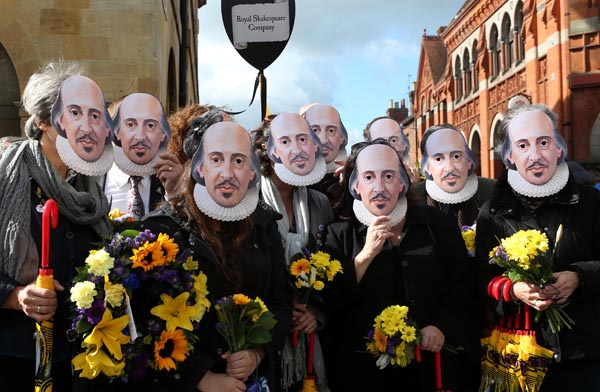 LONDON - If all the world’s a stage, William Shakespeare is its architect.

The playwright died 400 years ago Saturday, but remains the world’s most famous writer, living on through endlessly reinterpreted plays and globally known characters, including the tormented prince Hamlet and the star-crossed lovers Romeo and Juliet.

The long-dead Bard is one of Britain’s leading cultural ambassadors, and the anniversary of his death on April 23, 1616, is being marked across Britain with parades, church services and - of course - stage performances.

U.S. President Barack Obama took a break from political talks in London to tour Shakespeare’s Globe Theatre on Saturday, listening to Hamlet’s “To be or not to be” soliloquy and admiring the open-air venue - a recreation of the theater, built in 1599, where many of the Bard’s plays were first performed.

The president met a Globe troupe that has taken “Hamlet” on a two-year tour to almost 200 countries. They’ve performed Shakespeare’s tragedy on a tennis court in Kabul, Afghanistan, in a Syrian refugee camp in Jordan and at the U.N. General Assembly in New York.

Dominic Dromgoole, the Globe’s artistic director, said the world tour has taught him that Shakespeare “is a great aid to communication. He’s a great way of helping people to encounter one another, and discover similarities and also discover differences.”

“I think he has no agenda,” Dromgoole said. “There’s no particular drive within his work to say, this has to be worshipped or this has to be believed. He presents life, and he presents life with wit and brilliance and enchantment _ but it’s life. And everybody understands life.”

The Globe also erected screens along the River Thames, showing short films of excerpts from all 37 of Shakespeare’s plays, filmed in the locations where they were set: “King Lear” at the White Cliffs of Dover, “The Merchant of Venice” in the canal-crossed Italian city; “Timon of Athens” in front of the Parthenon.

In the playwright’s home town of Stratford-upon-Avon, the Royal Shakespeare Company mounted a stage extravaganza, televised live by the BBC. The potpourri of scenes from Shakespeare and works he inspired - including the musicals “Kiss Me Kate” and “West Side Story” - featured performances by John Lithgow, Judi Dench, Benedict Cumberbatch, Ian McKellen _ and even Prince Charles, who strode onstage during a comic sketch to settle a heated actors’ argument about the best way to recite “To be or not to be.”

Earlier, the heir to the British throne laid a wreath on the writer’s grave in Stratford’s Holy Trinity church. And thousands of people - many wearing Shakespeare face masks - watched a theatrical parade through the town 100 miles (160 kilometers) northwest of London, complete with schoolchildren, strolling actors and a New Orleans jazz band.

Across the country there was more - much more - taking place to celebrate a writer whose influence pops up in unexpected places.

In Trafalgar Square , visitors could listen to Princes in The Tower, “a costumed electro group offering unique interpretations of early music” and named for the tragic children in “Richard III.”

Tourism body Visit London promoted ShakeSpeak, a smartphone app that allows users to text like the Bard by auto-completing some of his famous phrases. Type “to be” and it fills in the rest: “or not to be, that is the question.”

Nowhere is Shakespeare’s presence more palpable than in London’s Bankside, south of the Thames. The district where the Bard once worked is enthusiastically embracing his legacy.

In Shakespeare’s time, it was London’s red-light district, home to taverns, brothels, playhouses and bear-baiting pits. By the late 20th century, it was quiet and neglected, but the opening of Shakespeare’s Globe in 1997 - and the Tate Modern art gallery three years later - have made it a cultural epicenter once again.

These days the riverside promenade throngs with tourists. The area is home to theaters, buzzing restaurants and busy pubs - though nothing like the 150 drinking places that stood here in Shakespeare’s time. Borough Market , which has stood in Bankside for 1,000 years, is a magnet for foodies and has helped spur a British food revival. It’s even home to a hip bakery that offers classes in Elizabethan bread-making.

Traces of Shakespeare can be found not just at the Globe but at the even earlier Rose Playhouse, built in 1587. Its foundations were uncovered in 1989 during construction work and the site now houses a small performance space alongside the old remains. There are plans for more work to put the whole site on public display and let visitors stand on the exact spot where Shakespeare - a bit actor in his own plays - once trod the boards.