Korea is short 80,000 engineers for its software industry

Korea is short 80,000 engineers for its software industry 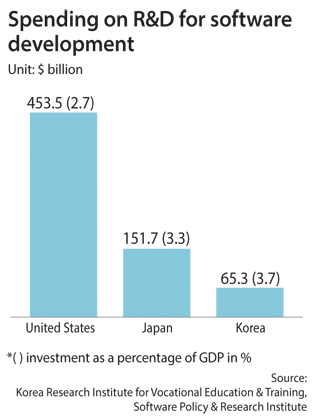 According to Park Dong, a researcher at the Korea Research Institute for Vocational Education & Training, Korea is short 80,000 software engineers needed to develop the nation’s software industry.

Korea is looking for 220,000 software developers with either a master’s or Ph.D degree or four years job experience in the software sector. However, there are currently only 140,000 people qualified to fill the positions.

Considering broader software business areas, including Internet of Things, big data and cloud computing, the estimated workforce that will be needed by 2018 will grow to 1.25 million, the research institute data cited.

To foster more talent in the software industry, the Ministry of Science, ICT and Future Planning and the Education Ministry are making efforts to start early education of software for elementary school and middle school students.

This year, 900 schools were designated as leading software schools and the government is providing 10 million won to aid software education at each of those schools.

Dokjeong Elementary School in Yongin, Gyeonggi, one of the designated schools, has been conducting software classes for two years. One class from the school’s second grade and all of fifth and sixth grades are learning computer coding and programming through their mathematics and science classes.

When JoongAng Ilbo visited the school on April 11, students were working on their own algorithms to make a treasure map. Eight-year-old Ryu Jun-seo drew a treasure map with 25 cells on paper and placed a treasure in one of those boxes along with 10 bombs in random spaces. He then wrote down directions to find the treasure in an algorithmic way such as: “Move three cells forward” or “Turn 90 degrees to the right.”

Ryu said “the process is difficult but still fun” after a struggle with his treasure finding algorithm.

Yoo Hye-won, the software teacher of the school, said, “When we want computers to follow our orders, we have to express our demands in ways computers can understand. And that is algorithm.

“Students can understand how computers process data through converting everyday life situations into an algorithm and the process helps develop their logical thinking.”

Still, there is a long way ahead to foster enough talents for the nation’s future software industry.

The Education Ministry hosted a training program for teachers through city and provincial education offices so they can teach software at schools, but only 2,500 teachers completed the course. Considering there are over 10,000 schools in the country, the number of trained educators falls greatly behind demand.

Also, it is difficult for schools to secure enough funds to create an environment for software education since new computers and networks need to be installed for quality computer classes.

“For effective software education to be possible, there needs to be down-to-earth support,” said Choe Jong-won, a computer science professor at Sookmyung University.