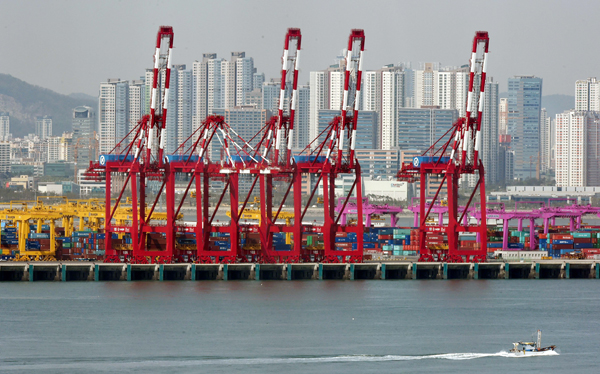 View of the Hanjin Incheon Container Terminal along Incheon New Port as seen across the Sihwa Seawall in Siheung, Gyeonggi, on Monday. [NEWSIS]

Hanjin Shipping on Monday asked its creditors to approve a “self-rescue” of the company by management.

A self-rescue is a weaker type of corporate restructuring than a debt workout or court receivership. A self-rescue program would be launched after creditors study the current status of the company, which is sitting on 6.6 trillion won ($5.8 billion) in debt.

Should creditors led by the state-run Korea Development Bank give a green light, the maturing debts of Korea’s No. 1 shipper - 3.2 trillion won by the end of this year - will be rolled over, and part of it could be rescheduled in a best-case scenario.

In return, Hanjin Shipping will have to carry out a range of reforms demanded by creditors during the extended period of debt payment. Should the company fail to fulfill them, the self-rescue plan would terminate automatically.

Given that Hyundai Group Chairman Hyun Jung-eun coughed up 30 billion won to help his ailing container carrier, Hyundai Merchant Marine, which is laboring under 4.8 trillion won debt, it is likely that creditors will ask Hanjin Group Chairman Cho Yang-ho to contribute some of his personal assets.

The chairman already announced Friday that he would relinquish control of the company he took over from his late younger brother’s wife, Choi Eun-young, in 2014, and he has already injected around 1 trillion won into the cash-strapped company through affiliates such as Korean Air.

Choi served as chairwoman from 2007, a year after her husband Cho Su-ho passed away, through 2014.

Some analysts predict Chairman Cho may refuse any demand for his personal help and allow the company to go into court receivership. That would lead to the company being liquidated, according to the tradition of the shipping industry.

Hanjin Shipping has few resources left to sell. Whereas Hyundai Merchant Marine disposed of its bulk carrier unit, terminals and stakes in affiliates Hyundai Asan and Hyundai Securities, Hanjin has already liquidated key properties, including a few container terminals. Even if it sells its bulk carrier unit, remaining container terminals, logistics centers as well as buildings and land, their entire value could add up to a mere 120 billion won. The company made public on Monday that it would sell a building in London to a British real estate investor for 66.69 billion won.

Some analysts are already skeptical about the prospect of Hanjin Shipping ever returning to normalcy. Park Kwang-rae, an analyst at Shinhan Investment, says the key would be upcoming negotiations that Hanjin is supposed to have over charter fees with its shipowners. Outstanding charter expenses total 5.5 trillion won, and the amount due by the end of this year is 928.8 billion won. Between 2017 and 2020, Hanjin should pay around 3 trillion won.

“The most plausible solution that creditors might come up with would be lowering the fees and Hanjin selling off its own assets,” Park said. “The assets deemed to be disposable are estimated at being worth 334 billion won, only 10 percent of the 3.2 trillion won debt that Hanjin is supposed to pay by the year’s end.”

Shares of Hanjin Shipping plunged 29.9 percent to close at 1,825 won on Monday.

Hanjin Shipping’s former chairwoman, Choi, meanwhile has been embroiled in an illegal stock transaction controversy. The Financial Supervisory Service (FSS) launched an investigation on Monday into whether Choi and her two daughters sold their combined 977,929 shares, or 0.39 percent, in Hanjin Shipping for 2.7 billion won after acquiring knowledge in advance of Chairman Cho giving up control of the affiliate. The three offloaded all the shares they owned in the company between April 6 and April 20.

The probe by the FSS is the first over unfair transactions in the country’s five most vulnerable industries - shipbuilding, shipping, construction, metals and petrochemicals.

Restructuring of those industries has emerged as the most urgent issue for the Korean economy. The FSS has asked the Korea Exchange to submit records of the Choi family’s transactions.

“The sales leave a lot of room to suspect unfair trading that used undisclosed information, although it’s too early to affirm at this stage,” an FSS official said.